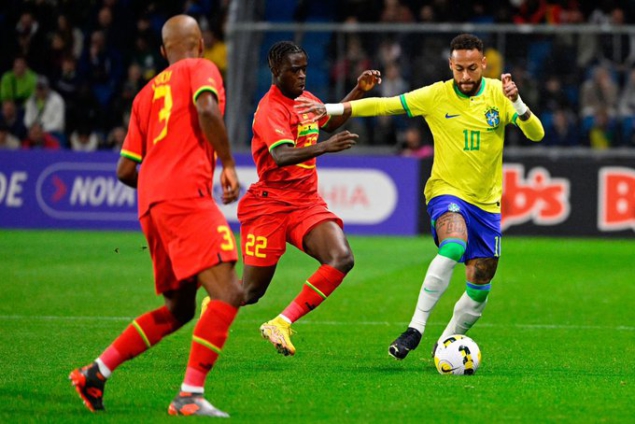 Black Stars head coach, Otto Addo, has given hints the Black Stars could have a new look in their pre-World Cup friendly with the Los Pinoleros of Nicaragua on Tuesday evening.

The team have since been in Spain, where they held a final training session on Monday ahead of Tuesday evening’s game. However, after the loss to Brazil, Addo, indicated he had ‘learnt a lot’ about his players, and coupled with fitness doubts of a few key players, the Black Stars could look different when they line up against Nicaragua.

“We are using these matches to try a lot of things – not only the players, also on systems. We have to find it together, this is very important for us as a team. We have new players to integrate – a whole lot of things, and I also want to use these games to give players a platform to show themselves. I am not worried, we have to take the right conclusions from every match and prepare for the World Cup, that’s the most important thing,” Addo said to the press ahead of the game.

It was not until the second half versus Brazil, the Black Stars carried an offensive threat. The Brazilians’ very-offensive approach plus Ghana’s poor defensive application meant the Samba boys submerged the Black Stars under pressure, consequently scoring three in forty minutes.

And coming up against the Los Pinoleros, an encounter Addo has described as ‘less difficult‘, he is expecting Ghana carries more attacking threat.

“We want to have a lot of connections, it’s a different game. We are favourites so it demands different things from us, and we trained and spoke about it in the last days. So hopefully we can see a lot of offensive patterns in the game.”

How should Ghana approach Nicaragua?

After the second-half versus Brazil which saw the Black Stars adjust to a 3-4-1-2, many have called on the Black Stars technical handlers to make the approach a mainstay going forward. However, this is a game where the Black Stars’ more front-foot approach with two attacking midfielders will work, and Addo admitted same in the Nicaragua pre-match press conference.

“It’s a different game, this game we are the favourites so it demands different things from us.”

Ghana, versus Brazil, lined up in a 4-3-3 – Addo playing his usual double 8s system, and it is the same approach which the Black Stars could start in versus Nicaragua. What will make the difference this time though, will be the profiles named in the lineup.

Daniel-Kofi Kyereh replacing Dede Ayew in the number 8 role will have Ghana start with two of their most technically gifted midfielders, as Mohammed Kudus could be one of the first names on the team sheet. In the holding midfield role, Elisha Owusu could be a ‘better’ option to Baba Iddrisu, who for the Black Stars has often shown some weakness on the ball.

Although Owusu has played only two games this season – after recently making an injury return, he boasted of better passing statistics as compared to that of Iddrisu’s last season. While Iddrisu completed 80% of his attempted passes, Owusu, recorded an 87% completion rate.

As admitted by Addo, the Black Stars are favourites for this game, and it is expected much of the game will be played in Nicaragua’s half. Last season, Owusu completed 82% of attempted passes in the opposition half, while Iddrisu managed 72%.

With Alexander Djiku a doubt due to injury, Mohammed Salisu partnering Daniel Amartey will not only be a mean partnership but will also offer the Black Stars more ball progression on the left. Meanwhile, Osman Bukari could replace Kamaldeen Sulemana who failed to impress versus Brazil. Inaki Williams starting over Felix Afena-Gyan should be a no-brainer and Jordan Ayew will most likely start.

These new adjustments will also help the Black Stars maintain their attacking shape of a 3-1-4-2, as Odoi can tuck in as a 3rd centre-back with Bukari holding width on the right.

A converse attacking approach the Black Stars can adopt will be to have a double pivot of Kyereh and Owusu. Jordan can take a new role, roaming in the half-space with Kudus as double 8s, shifting the Black Stars into a new shape of 3-2-4-1.

Besides these, there are many other approaches Addo can use versus Nicaragua. For instance, instead of playing Odoi, a more traditional fullback can be deployed to keep the width, while a different profile of a right winger is introduced.

Nevertheless, this is a game the Black Stars will have to make a statement, by scoring nothing short of three goals.

DISCLAIMER: The Views, Comments, Opinions, Contributions and Statements made by Readers and Contributors on this platform do not necessarily represent the views or policy of Multimedia Group Limited.
Tags:
Black Stars
Mishael Quaynor
otto addo