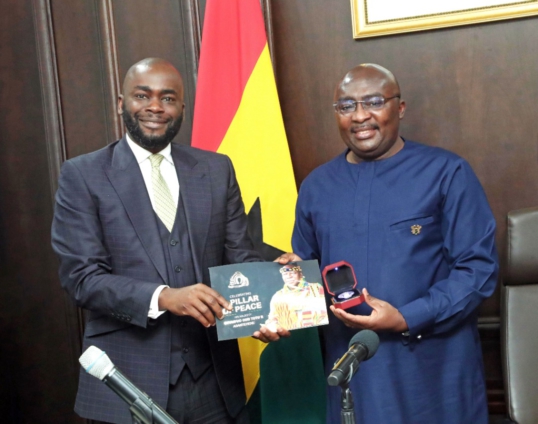 Vice President, Dr. Mahamudu Bawumia says leading the Committee of Eminent Chiefs to restore peace to Dagbon after 17 years of chieftaincy conflict is a monumental achievement for which Otumfuo Osei Tutu II must be celebrated.

According to him, Otumfuo demonstrated resilience by applying tact and diplomacy to lead the committee to bring Dagbon to normalcy after many had given up hope of a peaceful resolution.

Dr Bawumia said this when a team from the E ON 3 Group, and its partners in the Otumfuo commemorative gold coin project, presented the fourth gold coin to him at the Jubilee House in Accra.

The Executive Chairman of the E ON 3 Group, Mr Richard Adjei Mensah Ofori Atta, led the team to the Jubilee House.

Describing peace as critical for national development, the Vice President said the restoration of peace had set Dagbon back on the path of progress.

Dr Bawumia, who graced the launch of the gold coin at the Manhyia Palace in Kumasi on December 12, 2021, said honouring Otumfuo Osei Tutu II was therefore appropriate.

Dr Bawumia emphasised that it was not for nothing that Otumfuo Osei Tutu II was given the award of Pillar of Peace.

He explained that over the years, the nation had benefitted from his wise counsel and peace initiatives.

The General Manager of the E ON 3 Group, Mr Jesse Agyepong, who spoke on behalf of the delegation, said Otumfuo’s role in peace-building was a demonstration of his commitment to national development.

He noted that the invitation extended to Otumfuo to deliver the keynote address at the high-level forum of the 20th Anniversary of UN General Assembly’s adoption of Culture of Peace in 2019 attested to his credentials as a driver of peace.

Describing the gold coin as a life-long project , Mr. Agyepong said the project would be part of Ghana’s cultural heritage.