Our goal is to inculcate in Ghanaians culture of tree planting - Abu Jinapor - MyJoyOnline.com 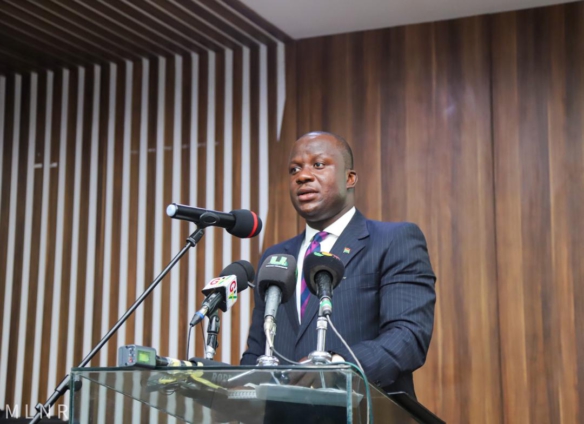 The Lands Minister, Samuel Abu Jinapor, has expressed Ghana’s commitment to contributing to the fight against Climate Change.

Speaking at the signing ceremony of the LEAF Coalition, he stated that Ghana’s commitment is borne out of the seriousness of the impact of Climate Change on the continent and the need for robust action and a concerted effort to reverse the negative trend.

He stated that such robust actions will not bear fruit if countries are unable to protect their forest reserves which he described as “the ‘Lungs of the Earth’ absorbing the carbon dioxide we exhale, and, thereby, contributing to the reduction in emissions.”

Abu Jinapor added that “Despite our knowledge of the importance of tropical forests, we continue to lose them at a very alarming rate. We are told that the world lost an estimated 10,000,000 hectares of primary tropical forest only last year. We cannot allow this to continue. “

He, however, noted that reversing the impacts of Climate Change cannot simply be the burden of state governments; he thus called for public-private partnerships to combat Climate Change.

“We, in Ghana, have begun an aggressive afforestation programme aimed at restoring our lost forest cover and are also embarking on efforts to reclaim our degraded lands.

“We have declared 11th June each year as “Green Ghana Day”, where all citizens and foreigners living in Ghana are encouraged to plant at least one tree,” he said of the Ghanaian government’s efforts to tackle Climate Change.

According to him, after successfully planting seven million trees this year, the government targets planting 20million trees next year.

“Our goal is to inculcate in Ghanaians the culture of tree planting as a means of restoring our lost forest cover and to contribute to the reduction in emissions.

“But one thing is obvious, governments alone cannot raise the finances needed to reverse the climate crisis,” he said.

“This is why the LEAF Coalition is so crucial to our fight against climate change,’ he added.

He expressed the government’s willingness to “work with the Coalition to invest in reduced deforestation, aggressive afforestation, and sustainable rural development.”

“Let me reiterate that the commitment of President Akufo-Addo and his government to lead Ghana in contributing to the global efforts to come to grips with the existential crisis of climate change is total and unwavering,” he concluded.