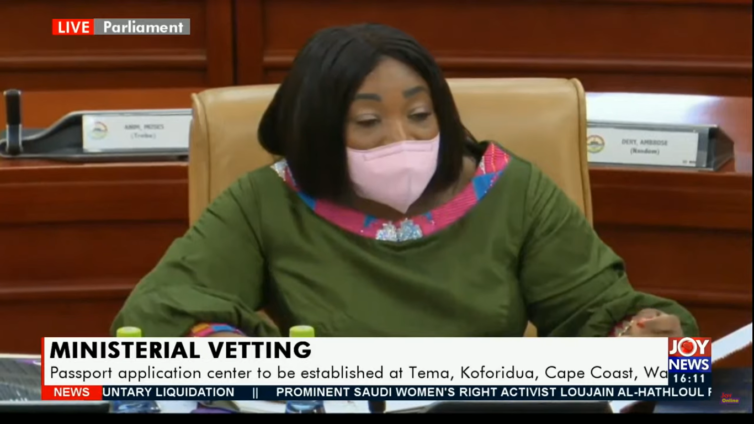 The Minister-designate for Foreign Affairs and Regional Integration has reacted to US President, Joseph Biden’s decision to sanction countries yet to make laws that accommodate homosexuals.

Shirley Ayorkor Botchwey when answering a question during her vetting on Thursday stated that Ghana’s laws clearly criminalise the practice.

She further stressed that Ghana is a sovereign country and has its own laws that its citizenry must abide by regardless of the relationship the country has established with other countries.

“Ghana is a sovereign country but as part of our foreign policy we engage countries all over the world; America is one of our strongest friends. But in this country we have laws. And our laws work and must work.

“So in spite of what somebody will say and in this case President Biden, the laws of Ghana criminalises on unlawful carnal knowledge and therefore the laws of Ghana definitely are supreme and that is what we all adhere to,” she noted.

Her statement comes after President Joe Biden on Thursday, February 4, issued a memorandum aimed at expanding protection of the rights of lesbian, gay, bisexual, transgender and queer and intersex (LGBTQI) people worldwide, including potentially through the use of financial sanctions.

According to President Biden, all human beings should be treated with respect and dignity and should be able to live without fear no matter who they are or whom they love.

The memo further directs U.S. agencies working abroad to work harder to combat the criminalisation by foreign governments of LGBTQ status or conduct, and directs the State Department to include anti-LGBTQ violence, discrimination and laws in its annual human rights report.

Meanwhile, commenting if her office will initiate processes to repeal the law that criminalises the act, the former Anyaa-Sowutuom MP said, “This is the house of law. This is where laws are enacted. And therefore, I believe that the question must be asked whether Parliament is ready to repeal such law. So Parliament must let us know when it is ready.”

However, the Minority Leader, Haruna Iddrisu disagreed with her.

According to him, the executive arm of government will be the institution to initiate the repeal process for the legislature to either accept or decline such a Bill.

“Even though this is Parliament by the very provisions of the constitution, particularly under Article 103 and 106; the Executive remains the source or initiator of legislation. Parliament does not on it own just wake up and want to work on laws.”

DISCLAIMER: The Views, Comments, Opinions, Contributions and Statements made by Readers and Contributors on this platform do not necessarily represent the views or policy of Multimedia Group Limited.
Tags:
Appointments Committee
Joe Biden
LGBTQI
Shirley Ayorkor Botchwey