Over 1000 shops flooded at Kumasi Central Market; traders blame Contracta for the mess 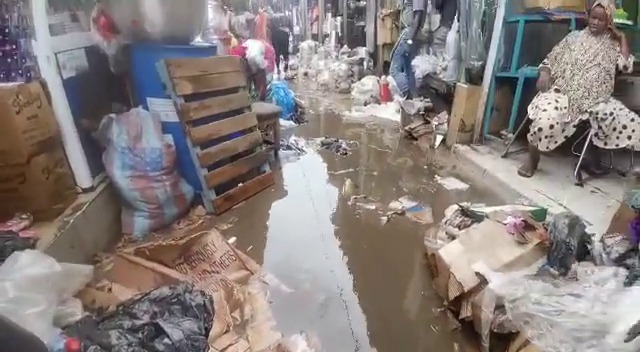 Traders occupying twenty percent of the Kumasi Central Market say wares in over 1,000 shops have been destroyed in Wednesday’s flooding.

They are accusing contractors of the Kejetia Redevelopment Project of blocking a sewage system at the construction site, leading to the floods.

But the contractors have denied causing the floods.

The traders had their wares floating on water after the downpour on Wednesday.

The 20 percent part of the central market space yet to be demolished for the market redevelopment project got flooded, destroying wares worth millions of cedis.

The flood victims have been cleaning and counting their losses.

They have called on NaDMO to come to their aid.

Chairman of the eleven-member steering committee, Kwabena Fosu, wants the metropolitan assembly to help ensure there is no recurrence.

Meanwhile, the construction firm, Contracta, has denied causing the flooding.

Consultant Emmanuel Danso says they have only taken measure to gather the debris in the gutters that are connected to the Subin stream at the market.

‘We have placed net in major gutters connected to the subin-stream, to separate the solid waste from the liquid so it can flow freely in the Subin-stream thereby avoiding flooding at the Multimillion market; debris left behind the sieves are in volumes and that is causing flooding so people including the traders should desist from dumping solid waste in gutters, we will continue to do that even after completion of the second phase of the market’.

DISCLAIMER: The Views, Comments, Opinions, Contributions and Statements made by Readers and Contributors on this platform do not necessarily represent the views or policy of Multimedia Group Limited.
Tags:
Contracta
Flooding
Kejetia Market