Over 400 structures including orphanage demolished at Jamestown - MyJoyOnline.com

Over 400 structures including orphanage demolished at Jamestown 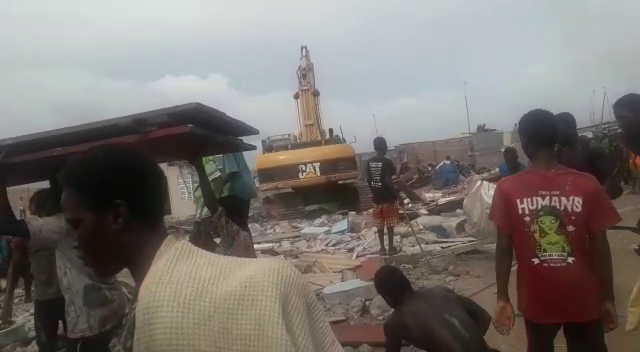 Over 400 structures including an orphanage have been demolished at Jamestown to pave way for the construction of a fishing habour in the area.

The $60 million project will have a landing site, storage facilities and recreational area.

However residents affected by the demolition protested the exercise, claiming that they were not informed ahead of time.

Narrating the incidence, Joy News’ Maame Esi Nyamekye Thompson said victims tried to salvage some of their property as the bulldozers clamped down their structures.

She indicated that although the people knew about the upcoming project, they had no idea when it was going to take place, hence they did not make preparation to vacate the premises.

Owner of the destroyed orphanage, Joyce Naa Bokor expressed her disappointment over the way the authorities went about the exercise.

With the shelter of about 25 children destroyed, Naa Bokor wondered what she was going to do to protect them especially amid the Covid-19 pandemic.

But, Sub Metro Chairman of Ashiedu Keteke, Seth Raymond Tettey has denied claims of residents that they were not informed prior to the demolishing.

According to him, residents were notified on April 14 about the project and were reminded of the exercise on Friday, however, some headstrong people stayed.

“You see, there is that perception of ‘don’t mind them, they can’t do it’ so they have not left. But since we came to announce that we are coming to clear this place, which was last week, some people started vacating the place,” he said

Mr Tettey also revealed that some compensation will be given to the affected victims.