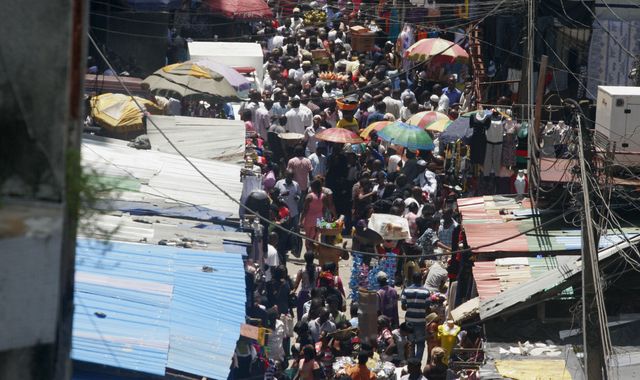 It is 6am and Lagos is alive as city pavements buzz with commuters preparing to pack into bright yellow Danfo minibuses.

In just a few decades, this small coastal town has transformed into a sprawling metropolis and is now the most populous city in Africa. A thriving symbol of the world’s population spilling over the eight billion mark.

With more than 15 million people living here, Lagos is double the size of the next biggest African megacities Kinshasa and Cairo.

The city is constantly growing as economic migrants flock to the hub from across Nigeria and the region.

Property developers are scrambling to capitalise on the influx. Skyscrapers are cropping up all over the wealthy residential areas of Ikoyi, Lekki and Victoria Island, as the infrastructure groans under the strain.

But nowhere else in Lagos is the burden of overpopulation felt more than the waterfront slums just across the lagoon.

These neighbourhoods have little to no access to basic urban amenities and face the constant threat of state-endorsed demolition.

The historic fishing slum of Makoko marks the Lagosian landscape and is growing in number but not geographical size. The stilt houses are now doubling up as residents build upwards to accommodate the expansion.

“In this economy – to be sincere – most people in Makoko don’t want to have a child anymore.”

Taiwo runs an orphanage and school on the polluted waters. More than three hundred children row in wooden boats from their homes to fill the classrooms.

Taiwo is one of his father’s 27 children but only has three of his own. He believes that limited education and access to contraceptives is preventing Makoko residents from family planning.

A reality faced by the 95 million Nigerians that live below the poverty line.

Nigeria is the most populated country in Africa and the largest black demographic in the world. The population has doubled in size twice in the last 60 years.

If current trends continue, the country is projected to become the third most populous nation in the world by 2050.

In an effort to address the surge, President Muhammed Buhari has doubled down on population policies.

Earlier this year, he launched legislation targeting high fertility rates by expanding access to birth control – distributed by the Ministry of Health to local clinics across the country.

But despite the state effort, contraceptive use in Nigeria is little more than a meagre 16% (National Bureau of Statistics August 2021).

The effort to educate women on family planning is consistently undermined by tradition and what NGO workers describe as “male involvement”.

Abortion is illegal in Nigeria unless the mother’s life is deemed to be at risk.

Walking along the plastic heaps of Egu – another waterfront neighbourhood in Lagos – community leader Kehinde Dare reflects on his advocacy work on the use of contraceptives.

He and his wife have been using birth control for seven years and he stays hopeful that it can become common practice.

But can women spearhead that choice?

“They have to follow the instructions of the husband,” said Kehinde.

Under the searing sun, the women echo his observation.

Mothers in this impoverished community go hungry to feed their many children. Those who don’t have children still pay a high price.

Rosaline Rogah, 20, has been married for three years and is yet to conceive. She describes being consistently berated by her husband’s family.

“They say I’m useless – that I have no use in anything,” she said.

As child-bearing continues to be closely wrapped up in a woman’s worth, family planning will remain contentious in this conservative society.

And so, Lagos will continue to grow and the most vulnerable will be the most overwhelmed.

DISCLAIMER: The Views, Comments, Opinions, Contributions and Statements made by Readers and Contributors on this platform do not necessarily represent the views or policy of Multimedia Group Limited.
Tags:
Lagos
Nigeria
Overpopulation
Poor family