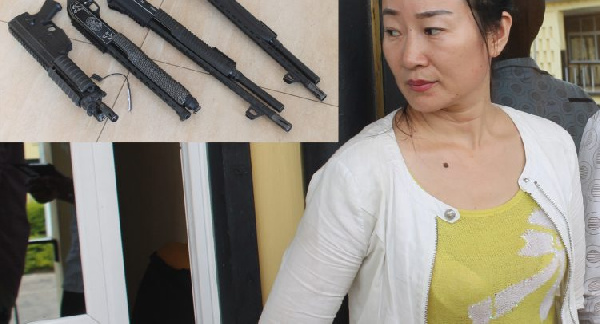 It seems that the most recent conversations on the state of play between “Galamsay Queen/Aisha Huang and the heavyweight political involvement in the illegal mining enterprise aren’t going away anytime soon.

This is so because the attempt by the opposition elements to politicise the Aisha Huang situation has resurrected the concerns surrounding John Mahama’s involvement with the Chinese gunrunner, Lucy Tang, with regard to her alleged illegal arms deals.

In the run-up to the 2016 elections, a 32-year-old Chinese woman, Lucy Tang was arrested for allegedly selling arms and ammunition without authority. She was arraigned before a Kumasi Metropolitan Assembly (KMA) court.

The Ashanti Regional Deputy Police Commander, ACP Ampofo Duku, who confirmed the arrest at the time, said a search of her vehicle revealed four pump action guns, one Sig Sauer rifle and 70 rounds of 380 auto ammunition.

She told police that the pump action guns were given to her by an unnamed Ghanaian while the foreign pistol belonged to her brother, identified as Sun Yun Chang.

Though Lucy Tang claimed the Sig Sauer rifle belonged to her, she failed to produce any document to prove ownership.

Police said in the course of the investigation, a suspect, Felix Debrah, showed up and claimed ownership of the four pump action guns, but he, too, could not produce convincing documents authorizing the possession.

This story was viral news in the countdown to the December general election. It evoked apprehension among Ghanaians who found it amazing that a foreigner – a female – could be gunrunning in the country a few weeks before a major election.

This was a Chinese woman who threatened our national security but then it would seem our internal security and immigration systems were compromised to an intolerable and dangerous level by politicians in power at the time.

Indeed, subsequent developments regarding Lucy Tang would prompt even more intriguing questions. From the manner, Mahama appointed Inspector General of Police directed that the case be moved to another court, to how Lucy Tang was handed over to the Ghana Immigration Service (GIS), and how she subsequently fled the country in the name of deportation raised a lot of eyebrows.

The question is, was Mahama involved in the deportation of Lucy Tang? Who ordered the deportation? What informed the discontinuation of the court process? Where are the weapons seized from the Chinese gunrunner? Is it normal to drop a case of this magnitude and which state institutions besides the judiciary can order deportation – that is if, indeed, Lucy Tang was expelled from Ghana?

It is hard to fathom here that Mahama with all these albatross dangling around his neck is able to get his town criers to wade into the Aisha Huang situation.

The fact that Mahama has no political sense is not in doubt, but to allow his attack dogs to wade into the Aisha Huang matter, knowing very well his own failures in the Lucy Tang saga is quite embarrassing.

Another unnecessary own goal.

At this stage, it’s only fair and proper that we all take in good faith the motives and perspective of Mahama and his leadership coterie. The evidence, whether concerning internal party politics or policy manoeuvres nationally, suggests the man has very different priorities than addressing the pressing realities of our time.

Unfortunately, the perception of Mahama is that he would just be coming back to the presidency for his gluttonous self-indulgence and without the, albeit temporary, galvanising effect of workable policies. Insecure, incompetent and unable to cobble together any cutting-edge policy he is on course to persuade voters not to bother. Why he even wants to be president again after his failed course in the past is unclear, and why he thinks he’s qualified for a comeback is little more than hubris.

The man supervised real corrupt enterprise in an era when his own policies rapidly eroded the foundations of democracy. He embodies shadowplay. Mahama is a choice that is no choice at all. And an alternative that represents a pause for breath.

So it’s entirely possible Mahama will get a go on the steering wheel – provided he continues to make absolutely clear that he will do nothing but nothing not desired by the Ghanaian people.

So really, his strategy – which appears so appalling if judged on the basis of actually caring about the lives and sufferings of those his party was founded to represent – is actually a failure whichever way the future goes.

Ernest Owusu Bempah is the Deputy Director of Communications of the governing New Patriotic Party (NPP).

DISCLAIMER: The Views, Comments, Opinions, Contributions and Statements made by Readers and Contributors on this platform do not necessarily represent the views or policy of Multimedia Group Limited.
Tags:
John Mahama
Lucy Tang
Owusu Bempah