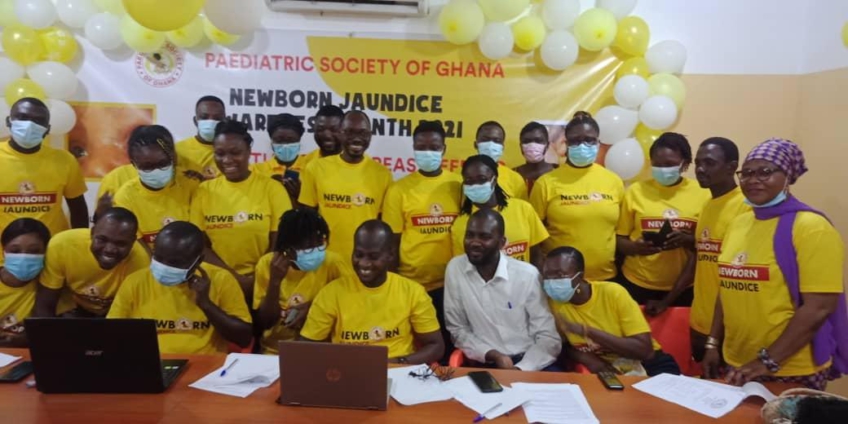 The Paediatric Society of Ghana (PSG) has organised a national stakeholders’ meeting in Accra, as part of its awareness creation on newborn babies with jaundice.

The meeting will also discuss and resolve issues on early initiation of breastfeeding for infants at birth.

Newborn (Neonatal) jaundice, which is increasing in Ghana, is a serious medical condition of the liver that causes yellowing of the eyes and skin of a newborn baby, and it is common in preterm babies often due to an immature liver, however, some infections, medication or blood disorders may also cause more serious cases.

The meeting, which was also screened virtually, was on the theme: “Early initiation of Breastfeeding Keeps the Yellow Away,” and attracted traditional leaders, Healthcare professionals and their respective Associations, the Ghana Health Service (GHS) and some private sector partners.

Stakeholder groups including the Ghana Medical Association, Ghana Registered Nurses and Midwives Association, Association of Obstetricians and Gynaecologists, attested to the fact that although neonatal jaundice was an important cause of brain damage, physical and mental handicaps (cerebral Palsy) and early death among infants in many communities in Ghana, little was known about the burden as well as the risk factors.

They called for intensified education on the benefits of early initiation of breastfeeding of infants, especially minutes after birth, which studies had shown, could reduce and prevent complications that may result from neonatal jaundice, hence the need to promote this simple practice as well as education to save the lives of babies.

These stakeholder Associations, however raised concerns about the barriers that prevented effective early initiation of breastfeeding, citing instances such as when the mother had undergone a cesarean section and was in severe, or mothers experiencing delayed onset of breast milk.

They pledged their full support to the ongoing national awareness creation and advocacy on early initiation of breastfeeding to help save the lives of children.

Director, Family Health Division, GHS, said babies were more likely to develop jaundice if they were not breastfeeding well, and encouraged mothers to breastfeed their babies as much as they could take.

“There must be the development of a clear policy communication on early initiation of breastfeeding, sustained training for midwives and other healthcare professionals, and the preparation of the mothers themselves during antenatal school and clinics, to understand the benefits so that they would ensure an enforcement once their babies were delivered.

We must also sustain engagement with parent support groups, men and boys clubs, and religious groups among other institutions for education and quality information, emphasizing that messages should be made a routine delivery at antenatal care, and targeted at women’s groups,” she said.

Dr Priscilla Wobil, a Representative from UNICEF Ghana, argued that “we have not seriously advocated for early initiation of breastfeeding” because knowledge about the benefits of breastmilk was low, and called for intensified education to disabuse the minds of people from the myths and misconceptions that had destroyed the lives of many children.

She also said negative socio-cultural practices and beliefs such as exposing the baby to the early morning sun and spilling breastmilk on the eye when symptoms began to show, rather than seeking immediate health care in an approved facility, also contributed to the rise in cases.

She called for proper training of midwives and other healthcare professionals, especially those assigned to the theatres, to be able to put the baby to the mother’s breast as soon as the mother was capable to breastfeed, to ensure bonding and also minimize the use of breastmilk substitutes for babies from caesarian sections.

She said it was critical for the public, both young and old, to appreciate the dangers associated with the condition, and the existing remedies, and encourage mothers to ensure early initiation of breastfeeding and also reporting for proper diagnosis and treatment.

The National Health Insurance Scheme (NHIS), she said, covered all children under 18 years without them having to pay any premium, therefore parents had no excuse to keep their sick children at home for want of money, and pledged the continuous support of the Authority to ensure quality healthcare for all especially children.

Dr Gyikua Plange-Rhule, a Paediatrician at the Korle Bu Teaching Hospital, and chairperson of the meeting, commended the PSG and its partners for the success of the 2021 Newborn Jaundice Awareness Month (the Yellow Month) which fell in May annually, and called on all stakeholders to support the campaign for early initiation of breastfeeding.

Mrs Linda Asante-Agyei, the Vice President, Ghana Journalists Association, said journalists needed to be well sensitized, updated with current statistics on NNJ and properly trained to be able to engage properly with the appropriate authorities for information to set the agenda for discussion.