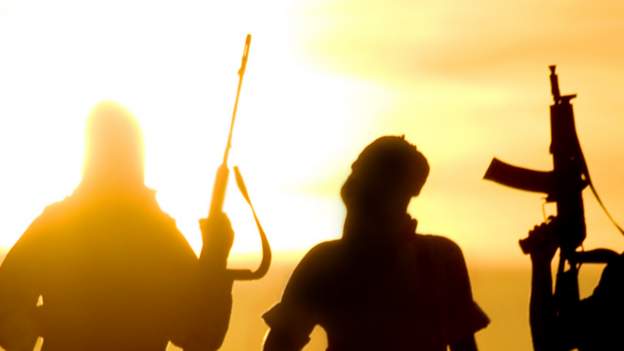 Distraught people have gathered at the palace of a traditional leader in Nigeria who has been kidnapped.

Ayuba Dodo Dakolo was abducted on Thursday with three of his children and several other people on his farm on the outskirts of the village of Rijana in the northern Kaduna state.

His subjects are at the palace awaiting news of his fate as gunmen are reported to have demanded a ransom and other items, including fuel, drugs and food.

The village is near the notorious Abuja-Kaduna highway, where kidnapping gangs often target people travelling between the capital, Abuja and the city of Kaduna.

Kidnappers have also hit the town of Magazu in neighbouring Zamfara state this week.

On Thursday night more than 20 people were seized, with 40 others – mostly women – captured a few days earlier.

The gunmen on motorbikes and vehicles also stole livestock during the attacks.

A senior Zamfara official confirmed the abductions, telling the BBC that more security forces had been sent to the area as hundreds of people were fleeing the town fearing further attacks.

Nigeria is struggling to curb a deadly wave of kidnappings for ransom by armed gangs who frequently target unprotected rural communities, schools and motorists.

The deployment of thousands of security forces has failed to end the violence so far.

The kidnappers, locally known as bandits, have killed more than 3,500 people since the beginning of this year, according to some estimates.

On Wednesday the senate passed a controversial bill to jail anyone who pays ransoms and impose the death penalty or life on kidnappers. It needs to be approved by the lower house and signed by the president before it becomes law.