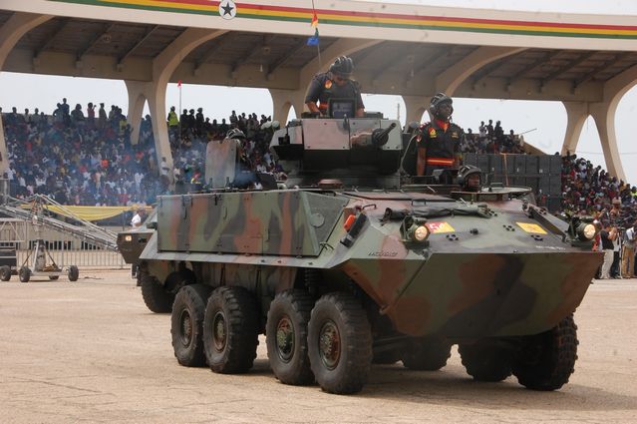 Parliament has approved an $86 million loan facility from Israel for the purchase of armoured vehicles for the Ghana Armed Forces.

About $80 million of the amount will go to Elbit Systems Land Limited of Israel for the supply of the vehicles whilst the rest will go to firms arranging the facility and other associated costs.

This ensued amid calls by the minority, for the house to alter processes to allow the approval to be executed in camera.

Minority Chief Whip Muntaka Mubarak said the minority had concerns about the purchase.

According to him, the delicate nature their concerns with regards to the security framework called for a closed-door sitting as earlier agreed with the Defence Minister.

“I know a number of issues that will be raised by some members and in my view, those issues should not be in the public domain…Yesterday, some of them were raised with the Defence Minister and Foreign Minister and they all agreed that we should do this in closed sitting.

“These are accoutrement of our military and It is not best we discuss it in open chamber,” he said.

But his proposal was subsequently declined.

But Majority Leader Osei Kyei-Mensah-Bonsu insisted a backroom conversation has gone on among leaders of both sides to allow for the approval to be done in public adding that MPs will be measured in their comments.

“We said to ourselves that we will manage the discourse… This is the arrangement that we had and I believe the members who are here will respect the format that we agreed on,” the MP said.

Speaker Prof. Mike Ocquaye said the debate will go on in public, but he will stop MPs if they go overboard.

Defence Minister Dominic Nitiwul also assured there will be value for money in the purchase.

“Public procurement will do value for money audit, Parliament will also do theirs, and the Ministry for Finance before the contracts are finally executed and completed,” he said while expressing appreciation for the support received from both sides of the House.

The loan facility was agreed between the Ghana government, represented by the Finance Ministry and the Israel Discount Bank Limited for an amount of $74 million and a separate one of $12 million.

DISCLAIMER: The Views, Comments, Opinions, Contributions and Statements made by Readers and Contributors on this platform do not necessarily represent the views or policy of Multimedia Group Limited.
Tags:
Amoured vehicles
Ghana Armed Forces
Loans
Parliament