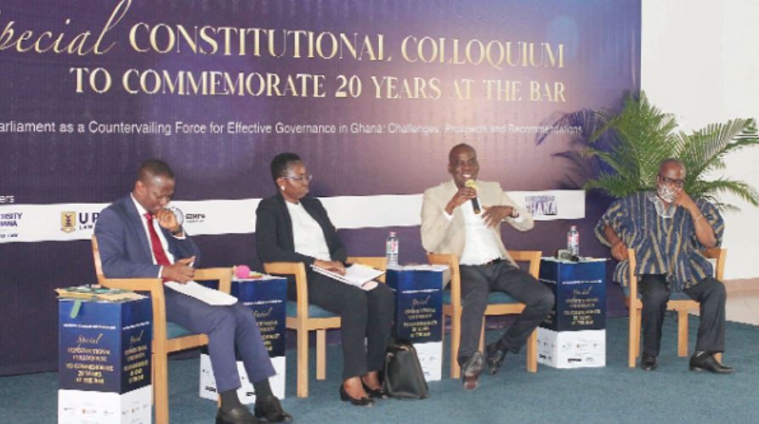 Parliament has failed to be an effective check on the Executive arm of government, the Minority Leader, Haruna Iddrisu, and a Deputy Attorney General, Alfred Tuah-Yeboah, have said.

But while Mr Iddrisu attributes the failure of Parliament to extreme partisanship and the extensive powers granted the Executive by the 1992 Constitution, Mr Tuah-Yeboah is of the view that the legislative body has the necessary powers to be effective but has failed to utilise them.

The third panellist was Victoria Barth, a private legal practitioner and lecturer at the GSL. All three panellists were members of the 2002 Class of the GSL.

The colloquium was on the theme, ‘Parliament as a Countervailing Force for Effective Governance in Ghana: Challenges, Prospects and Recommendations.’

It was attended by two Justices of the Supreme Court, Justice Nene Amegatcher and Prof Justice Henrietta Mensa-Bonsu; the Majority Leader in Parliament, Osei Kyei-Mensah-Bonsu; a former Speaker of Parliament, Prof Aaron Mike Oquaye; the Director of the GSL, Yaw Oppong, and many students of law.

According to Mr Iddrisu, the 1992 Constitution had indirectly made the President a monarch, with so many powers to the extent that Members of Parliament (MPs), depending on the government in power, performed their functions to please the President.

However, for Mr Tuah-Yeboah, Parliament was equally powerful, if not more than the Executive, as it had the power to remove the President and censure ministers; therefore, any failure on the part of Parliament should be placed at the doorstep of the legislative body.

“No one is denying Parliament the power to check the Executive, but perhaps it has failed to do so from its own doing,” he said.

Mr Iddrisu said Article 78 of the 1992 Constitution, which enjoined the President to appoint majority of ministers from Parliament, had made the Legislature passive, as MPs would yield to the influence of the Executive in order to get appointments.

“Have you ever seen any Minister of State who is also an MP criticise the government or the President on the floor of Parliament? He wants to please the President in order not to avoid a reshuffle,” he said.

Again, the Minority Leader said, due to excessive partisanship, instead of scrutinising the actions of the Executive, Parliament had become more or less a rubber stamp for the Executive.

For instance, he said Parliament had, over the years, failed to diligently scrutinise loan agreements brought before it by the Executive.

Mr Iddrisu said Parliaments under both New Patriotic Party (NPP) and National Democratic Congress (NDC) governments had been guilty of such failure and mentioned loan agreements such as the STX, CNTI and the recent $750 million.

“Take the agreement on the $750 million loan — it arrives at 5 p.m. and you want it passed in two hours. What due diligence is the Parliament of Ghana doing to get the public purpose and good served?” he asked.

“This is a mark of the failure of our Parliament to undertake scrutiny and due diligence because we want to satisfy the Executive President,” the Minority Leader said.

However, contributing to the discussion, Mr Kyei-Mensah-Bonsu said the hybrid system, whereby a legislator is allowed to also be a minister, should not be a hindrance to the work of Parliament.

He said some of the best parliaments in the world had legislators also acting as ministers.

Explaining his position, Mr Tuah-Yeboah said the Constitution had given Parliament so many powers and responsibilities, but the institution had failed to act on some of them.

On what was inhibiting the work of Parliament, the Deputy AG mentioned the qualification of MPs in terms of skills.

“There are no qualification criteria in terms of skills for MPs. How do you expect such MPs to be a check on the Executive?” he queried.

For her part, Mrs Barth said Parliament had failed to pass many gender-sensitive laws, such as the Affirmative Action Bill which had been pending in the House for many years.