'Parliament is a chamber of intellect, not a chamber pot for brawlers' - Gabby Otchere-Darko tells MPs - MyJoyOnline.com

‘Parliament is a chamber of intellect, not a chamber pot for brawlers’ – Gabby Otchere-Darko tells MPs 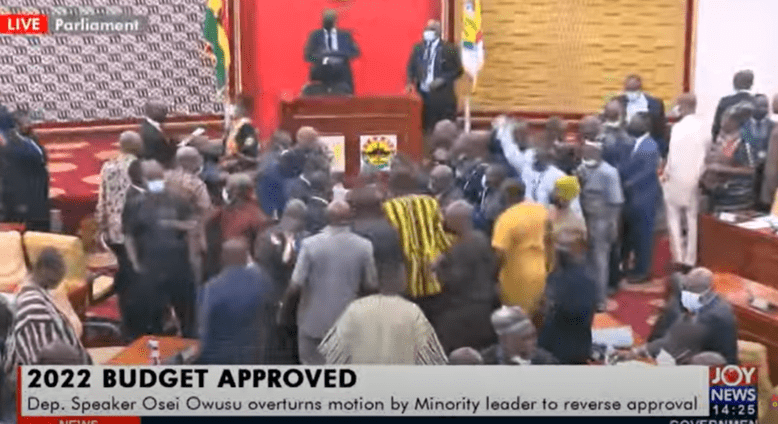 A member of the New Patriotic Party, Gabby Asare Otchere-Darko, has fumed at MPs over their conduct in Parliament during Wednesday’s sitting.

In a tweet, he lamented how the current Parliamentarians by their actions are denting what he described as Ghana’s reputation as a democratic shining light, adding that there could be more order in the House.

“Ghana’s Parliament since January 6 appears committed to shedding its proud image as a shining light for democracy to something uncharacteristically disgraceful. It is as if we have to have our way by arguments or fisticuffs. There can be more order on a playground of toddlers,” he said.

Parliament is a chamber of intellect and not a chamber pot for brawlers.

“Parliament is a chamber of intellect and not a chamber pot for brawlers,” he added.

There was pandemonium when the First Deputy Speaker, Joseph Osei-Owusu, refused a motion by the Minority to overturn the approval of the 2022 Budget Statement and Economic Policy of the government by the Majority last Tuesday.

The agitated NDC MPs started shouting unprintable words at the Deputy Speaker which was retaliated by the Parliamentarians across the aisle.

The Speaker was forced to suspend the sitting for an hour, but during the break, Ghanaians witnessed a scuffle between the two sides.

This 10-minute commotion is the latest chaos yet following the January 7, 2021 incident.

Meanwhile, Parliament has rendered an unqualified apology to Ghanaians over the fisticuffs that nearly ensued between the Majority and Minority Caucuses over the approval of the 2022 budget on Wednesday.

According to the legislature’s Director of Public Affairs, Kate Addo the Parliamentarians no matter how divided they are, are working with the interest of the people at heart.

In an interview with JoyNews’ Kwesi Parker-Wilson, she, however, explained that it is “not out of the ordinary for MPs to be forceful” in order to get their opinions or position considered on certain matters.

“While what is happening may not be the best, we pray that we don’t see things like that in our Parliament but when they happen, we must know that everything is being done with the utmost interest of the people.

“We apologise for what may not sit well with people, we promise that as much as possible we will work bearing in mind the nuances and cultural sensibilities of the people that we serve,” she told Kwesi Parker-Wilson.