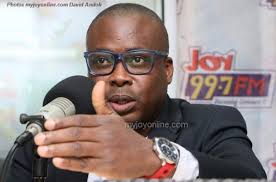 The Asogli State Council has dismissed claims by host of Good Evening Ghana, Paul Adom-Otchere, about the conduct of the Togbe Afede XIV, while serving on the Council of State.

In a letter written in response to comments by Mr Adom-Otchere on Wednesday, the Asogli State Council stated that Paul lied about the number of times the traditional leader attended meetings while serving on the Council.

During an editorial on Good Evening Ghana on Tuesday, Mr. Adom-Otchere alleged that based on facts available to him, the Agbogbomefia of the Asogli State and former President of the National House of Chiefs, Togbe Afede attended only 16% of meetings during his tenure as a member of the Council of State.

In his view, even though the move has been hailed on social media as a patriotic gesture, he does not understand the essence of the praises which were showered on the traditional leader.

The Good Evening Ghana host, therefore, criticised Togbe Afede and urged the public to desist from praising him since the refund of his ex-gratia does not put him on any ‘moral high ground’.

It is on the back of this that social media was buzzing, commending the traditional leader.

But in an editorial on Tuesday evening, Mr Adom-Otchere described the Paramount Chief’s conduct as populist and unnecessary.

DISCLAIMER: The Views, Comments, Opinions, Contributions and Statements made by Readers and Contributors on this platform do not necessarily represent the views or policy of Multimedia Group Limited.
Tags:
Council of State
Ex-Gratia
Paul Adom-Otchere
Togbe Afede XIV