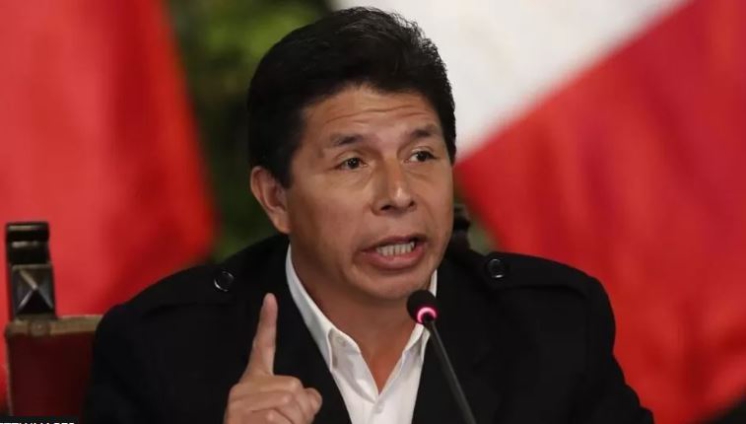 Peru’s ousted President, Pedro Castillo has been seen on police premises after being impeached – just hours after he tried to dissolve Congress.

In a fast-moving fight over who controls the country, Mr Castillo said he was replacing Congress with an “exceptional emergency government”.

But the lawmakers ignored the announcement, and in an emergency meeting they impeached the president.

He was then seen on police premises – it is unknown if he was arrested.

In the photos – which were shared by police on Twitter but subsequently deleted – he could be seen sitting, seemingly relaxed, and chatting to those present.

Police have not clarified why the photos were later erased or whether Mr Castillo is free to leave.

Meanwhile, Congress has sworn in Dina Boluarte, who until now was the country’s vice-president.

Ms Boluarte, a 60-year-old lawyer, said she would govern until July 2026, which is when Mr Castillo’s presidency would have come to an end.

Ms Boluarte is the first woman to lead Peru. Speaking after taking the oath of office, she called for a political truce to overcome the crisis which has gripped the country.

The dramatic chain of events began with President Pedro Castillo giving an address on national television in which he declared a state of emergency.

He announced that he would dissolve the opposition-controlled Congress, a move which was met with shock both in Peru – several ministers resigned in protest – and abroad.

The head of the constitutional court accused him of launching a coup d’etat.

The United States “strongly urged” Mr Castillo to reverse his decision and Ms Boluarte accused him of breaking the constitutional order.

Peru’s police and armed forces released a joint statement in which they said they respected the constitutional order.

Mr Castillo made the move to dissolve Congress just hours before it was due to start fresh impeachment proceedings against him – the third since he came to office in July 2021.

He has accused those aiming to remove him from office of trying to undermine democracy.

In his televised address he said: “In response to citizens’ demands throughout the length and breadth of the country, we have decided to establish an exceptional government aimed at re-establishing the rule of law and democracy.”

He said that “a new Congress with constituent powers to draw up a new constitution” would be convened “within no more than nine months”.

But Congress, which is controlled by parties opposed to Mr Castillo, convened an emergency session and held the impeachment vote Mr Castillo had been trying to prevent.

The result was overwhelming: 101 voted in favour of impeaching him, with only six against and 10 abstentions.

Peru has been going through a rocky political period, with multiple presidents ousted from office in recent years.

In 2020, it had three presidents within the space of five days.

Mr Castillo, who is a left-wing former school teacher, was elected in June 2021 in a polarising election in which he defeated his right-wing rival Keiko Fujimori.

He had recently been fighting allegations of corruption, which he said were part of a plot to oust him.

DISCLAIMER: The Views, Comments, Opinions, Contributions and Statements made by Readers and Contributors on this platform do not necessarily represent the views or policy of Multimedia Group Limited.
Tags:
Dina Boluarte
Pedro Castillo
Peru