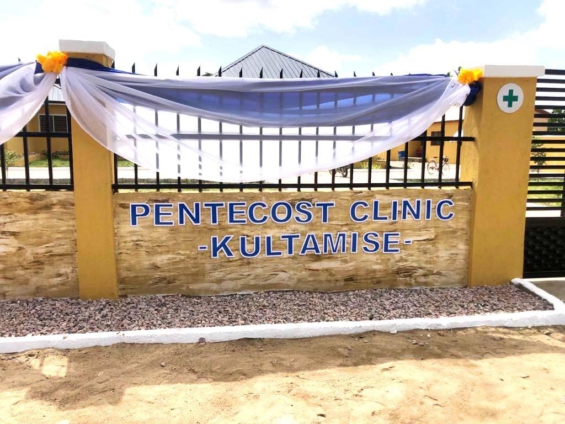 The Church of Pentecost has commissioned a state-of-the-art health centre at Kultamise, near Bawku in the Upper East Region.

Commissioning the health facility, the General Secretary of the Church of Pentecost, Apostle Alexander Nana Yaw Kumi-Larbi, said the construction of the facility was informed by the urgent need to provide a health facility that can serve Kultamise and its surrounding communities to help reduce maternal and child mortality in the district.

According to him, during the rainy season, the people living in the area usually go through hell in accessing healthcare as they often had to cross a major river to Pusiga.

This situation, according to residents, has contributed to worsening the plight of pregnant women in the area, especially when in labour, as their spouses had to carry them on their backs or on motorbikes to cross the river to access healthcare in Pusiga.

Apostle Kumi-Larbi noted that the project which commenced in 2019 is part of a package of social development projects undertaken by The Church of Pentecost across various locations in the country. He disclosed that another clinic is currently being constructed by the Church at Abesiwa, on the Kumasi-Sunyani Highway.

He stated that The Church of Pentecost, in 2018, launched its 5-year vision (Vision 2023), dubbed “Possessing the Nations” with an overarching goal of equipping the Church to transform every sphere of society with values and principles of the Kingdom of God.

“As part of the ‘Possessing the Nations’ agenda under Vision 2023, the Church envisaged partnering the Government of Ghana in contributing to accelerated socio-economic development as part of the effort to launch our transformation agenda in society.

He also disclosed that the Church has established social enterprise ventures which are providing employment opportunities to the youth in Ghana.

The General Secretary pointed out that one scripture that has spurred the Church on in initiating and completing the facility has been Matthew 25:36b, which reads: “I was sick and you looked after me.”

“It is our prayer and hope, therefore, that anyone who enters the corridors of this clinic will receive the best of care and divine healing when necessary,” he said.

“This feat can only be achieved if all the major stakeholders i.e. the Ministry of Health, CHAG, Pentecost Health Services, and the Ghana Health Service play their respective roles well.”