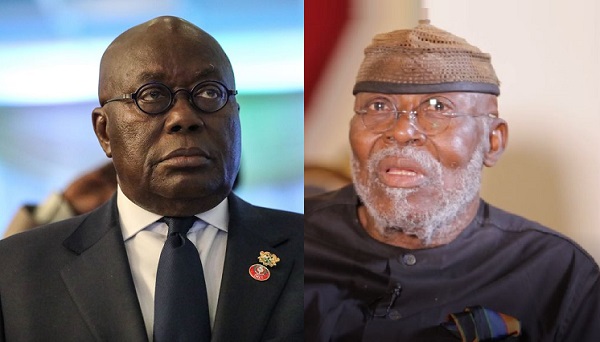 According to the politician, the personalities surrounding the president have not done much in pushing the country in the right direction.

For him, the downturn the country is currently experiencing is a testament to the fact that the President’s disciples have contributed little in nudging the President toward national development.

“These are people who are afraid to tell him exactly what is happening. This has happened to a lot of Presidents in this country. If Nana Addo will listen, I’m sure the way he is going right now he will never go there,” he added.

Speaking to JoyNews, Dr Nyaho-Tamakloe insisted that his advisors and helpers have failed to tell him the true situation.

Dr Nyaho-Tamakloe says that if the President were abreast of all the issues, persons accused of corruption under his watch should have been axed by now.

“People have been accused of several things, there have been infractions all over since Akufo-Addo came to power, what has been done to them?” he asked.

“I know Nana Addo was not like that, so what has happened? I’m surprised. The Nana Addo that I knew is not the one that is ruling Ghana now,” he told JoyNews‘ Benjamin Akakpo.

So far he believes the country has retrogressed under the Akufo-Addo administration adding that the President and his cohorts are to blame.

He listed a number of people who could have coerced the President in the right direction if given the chance.

They conclude; “Charles Brobby, myself, Kwesi Pratt. There are people who will tell him exactly what is happening.”

DISCLAIMER: The Views, Comments, Opinions, Contributions and Statements made by Readers and Contributors on this platform do not necessarily represent the views or policy of Multimedia Group Limited.
Tags:
Fear
Nana Akufo-Addo
Nyaho-Nyaho Tamakole
Truth