People with Ebola symptoms should not self-medicate – Doctor 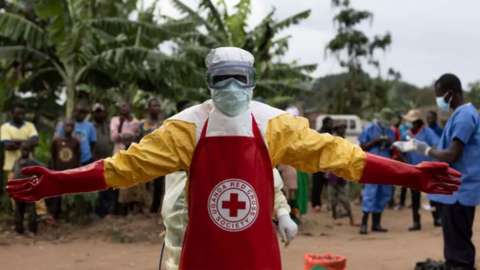 The outbreak began in Mubende, central Uganda, over a month ago

A leading doctor in Uganda has urged people not to try and treat themselves if they are showing any of the symptoms of Ebola.

The call from Samuel Oledo, the president of the Uganda Medical Association, came after six children in the same family in the capital, Kampala, were found to have contracted Ebola.

For weeks medics have been calling for tougher measures to prevent the virus from spreading to the city.

The six siblings got infected after a relative came to stay from one of the country’s worst-affected districts, and later died, health authorities confirm.

“Most of our people have a mentality that you can self-medicate… and they haven’t understood how catastrophic Ebola is,” Dr Oledo told the BBC’s Newsday programme.

He added that it was worrying that more cases were showing up in Kampala.

Since the outbreak began in September, Uganda’s health ministry has recorded 109 cases and 30 deaths.

Earlier this month the districts at the epicentre of this outbreak, Mubende and Kassanda, were put under quarantine.

The initial symptoms of Ebola can include a sudden fever, intense weakness, muscle pain and a sore throat.

DISCLAIMER: The Views, Comments, Opinions, Contributions and Statements made by Readers and Contributors on this platform do not necessarily represent the views or policy of Multimedia Group Limited.
Tags:
Ebola virus
Medical doctor
Uganda