Pep Guardiola: Manager will not 'betray' Man City when he makes decision on future - MyJoyOnline.com

Pep Guardiola: Manager will not ‘betray’ Man City when he makes decision on future 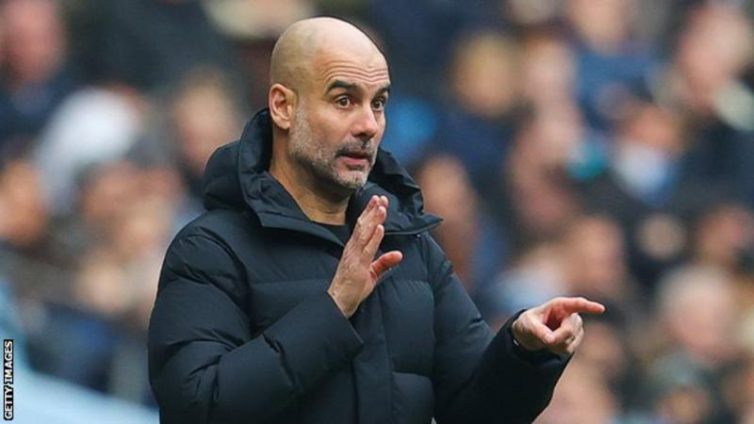 Manchester City boss Pep Guardiola says he will be open and honest with the club when the time comes for the coach to make a decision on his future.

Guardiola’s contract with City runs until the end of the 2022-23 season.

However, the 51-year-old claims he is not thinking about where he will go if he leaves the Etihad Stadium.

“They gave me everything, so I cannot betray them or do anything wrong to them. That would be not nice from my side,” said Guardiola.

“Together we took decisions to come here and to extend the contract two times and it will be the same now. It depends how they feel about me and how I feel myself in the club.”

He added: “I’m not a guy to think much about the future when I have still the contract I have.

“I’m not good enough to think far, far away about my future because my future always depends on results. I’m not concerned for any second.”

Guardiola, who said he feels “protected” and “comfortable” in his current position, is aiming to win his fourth Premier League title in six years in England, while he has also led City to four Carabao Cups and the FA Cup.

Having opened up an 11-point lead over Liverpool at the top of the Premier League, the former Barcelona and Bayern Munich boss is eyeing success in the Champions League for the first time since his triumph with Barca in 2011, having lost to Chelsea in last season’s final.

Guardiola has spoken in the past about pursuing other interests and challenges later in life, but he insists that is not on his mind.

“I don’t know – I feel good and comfortable,” he said when asked how long he intends to continue in management.

“When I’m not energetic and feel a little bit drained or tired, I’m pretty sure I will quit. But right now, I feel good.”

Guardiola was speaking at a news conference before his side’s trip to face Southampton on Saturday, and the Catalan explained that his desire to improve players and his team’s overall performance levels are what keeps him motivated in management.

“Still we can play better, still some players can improve and we have some things I don’t like,” he said.

“It’s the desire to not have the feeling that all the managers and players have when we lose, and to have the pleasure when we win games.”