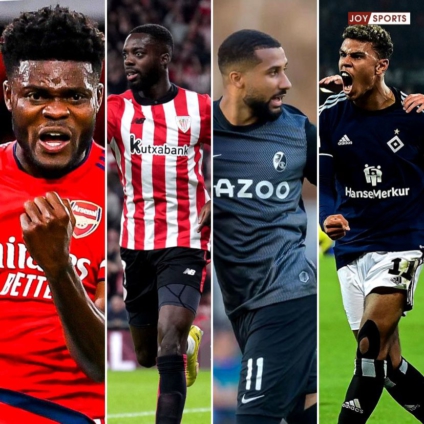 With the World Cup drawing closer, it was a good omen for Ghanaian players abroad over the weekend after returning to club football.

While some of the Black Stars strikers enjoyed a good time, other forwards and midfielders were also in good form for their respective clubs.

Here’s a wrap of the performances of some Ghanaian players for their respective teams over the weekend:

Inaki Williams scored and created another for Athletic Bilbao in their thumping of UD Almeria in the Spanish La Liga. The forward after being assisted by his brother Nico Williams, returned the favour to his younger brother as Bilbao sealed a 4-0 win.

Ransford-Yeboah Konigsdorffer was on target for Hamburg as they recorded a 2-1 victory over Hannover 96 in the Bundesliga 2. The forward was introduced into the game after 70 minutes and went ahead to score the winning goal in the 92nd minute.

Thomas Partey delivered a Man of the Match performance on Saturday in the North London derby as Arsenal eased their way past Tottenham Hotspur. Partey opened the scoring at the Emirates Stadium before being substituted after 73 minutes.

In his sixth league game of the season, Daniel-Kofi Kyereh scored his first goal for Freiburg in their 2-1 win over Mainz 05 in the German Bundesliga. The attacking midfielder has started three games for the club since joining them this season.

Richmond Boakye-Yiadom also netted his maiden goal for Greek side PAS Lamia as they earned a 1-0 win over Levadiakos in the Greece Super League on Saturday. The forward was making a return to the team after serving a suspension.

Despite playing just 52 minutes, Emmanuel Boateng scored the only goal of the game for Rio Ave who defeated Santa Clara in the Portuguese top flight.

Patrick Twumasi scored directly from a corner kick for Maccabi Netanya in their loss to Hapoel Be’er Sheva in the Israeli Premier League.

Ibrahim Sadiq grabbed his fifth goal of the season for BK Hacken as they managed a 1-1 draw against Varbergs BoIS.

Mohammed Fuseini came off the bench to net in Sturm Graz 3-0 win on Sunday against Austria Wien in Austrian Bundesliga.

Braydon Marvin Manu scored for Darmstadt in. their 2-1 win against Paderborn.

Kwabena Owusu was on the scoresheet over the weekend as well with Qarabag coming from behind to beat Neftci Baku.

Jordan Ayew was involved in Crystal Palace’s goal against Chelsea in the English Premier League. The Ghanaian assisted Odsonne Edouard to score the game’s opener.

Youngster Kamal Sowah was also on the assist sheet for Club Brugge who recorded a convincing 3-0 win over Mechelen.

There were minutes for Jojo Wollacott, Tariq Lamptey, Alidu Seidu, Alexander Djiku, Majeed Ashimeru, Mohammed Kudus and a host of others.

DISCLAIMER: The Views, Comments, Opinions, Contributions and Statements made by Readers and Contributors on this platform do not necessarily represent the views or policy of Multimedia Group Limited.
Tags:
Ghanaian Players Abroad
Lawrence Baidoo