Phone thief made to clean gutter, fed and given new clothes - MyJoyOnline.com

Phone thief made to clean gutter, fed and given new clothes 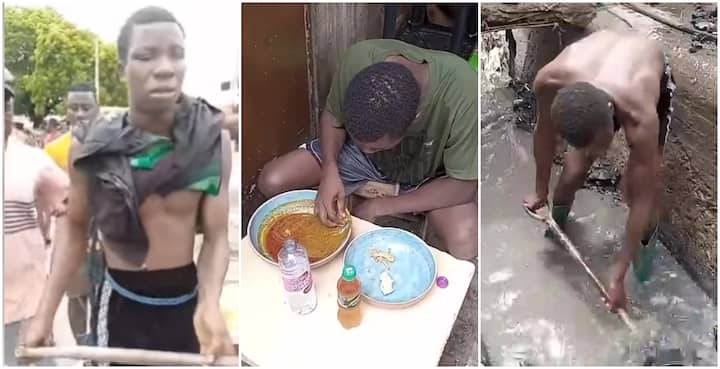 After the theft incident, Aliu was given a new set of clothes to wear and sent to the classiest restaurant to eat till he was satisfied [Source: @We Are Ga - Facebook]

A 22-year-old Nigerian national could not believe his luck when a group that caught him stealing a mobile phone gave him a kind treatment.

The incident took place in Accra’s suburb of Akoto Lante, near James Town.

The humane treatment of a stealer was at instance of a man believed to be a leader in the community. But for him, Aliu John could have suffered an instant justice for his act which took place on Saturday, May 14.

Instead of handing him over to the Police, the residents asked the youngman to clean a dirty gutter in the locality, after which they served him four balls of banku with fish, a bottled water and a drink of his choice.

He was given protective boots and a shovel to aid him in undertaking the task. To prevent him from escaping, his waist was tied with a thick rope held at one end by a man all through the cleaning task.

After completing that task, the young man was allowed to take his bath, given a new set of clothes and taken to one of the nice restaurants in the locality, where he was served a sumptuous, heavy meal to his satisfaction.

Upon a request by the kindhearted leader, Aliu John who looked quite solemn appreciated the residents for not taking his life.

“You Ghana people are very good people. If it were a different community, they would have killed me. I won’t steal again,” he promised in one of two videos that have been shared on Facebook.

On his part, the youth leader cautioned him not to attempt stealing again because he may not be this lucky the next time.

“We are kind. Gas won’t kill you. We changed your clothing, helped you shower, and fed you. We chose to treat you in this manner though we found you stealing,” he noted.