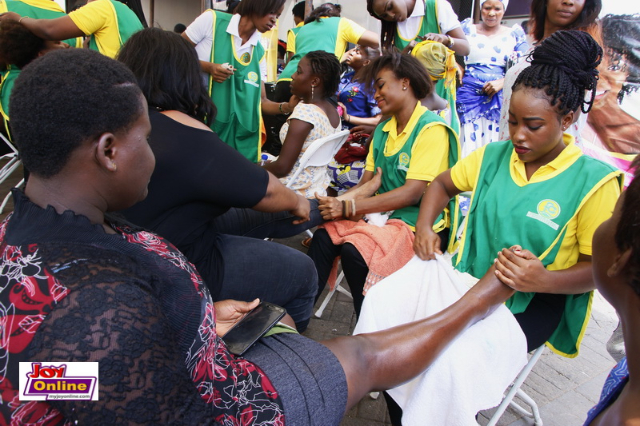 It was all fun and smiles at the forecourt of The Multimedia Group on Friday as hundreds of ladies trooped to the venue to be given a treat of their lives.

The ladies, courtesy of a male group, PamperDem GH, were given soothing massages, manicures, make-ups, drinks and comedy performances.

According to Mic Gizo, it was time for the men to return the favour and pamper their ladies.

Organizers had expressed their desire to host ladies from PepperDem Ministeries, who generated a lot of controversies after they were reported to have said that women who cooked for their husband were slaves.

Well, it was a no-show for the PepperDem but Afia Pokua, the leader of the SugarDem GH, who had countered PepperDem, was seen at the event.

The ladies, after the massages, make-up sessions, took part in a dancing competition where they won prizes.

They were also treated to some rib-cracking comedy from ‘Ghana’s Comedy King’ DBK with a special appearance from rapper Edem and some Hitz FM presenters including Andy Dosty, Merqury Quaye and Dr Pounds.