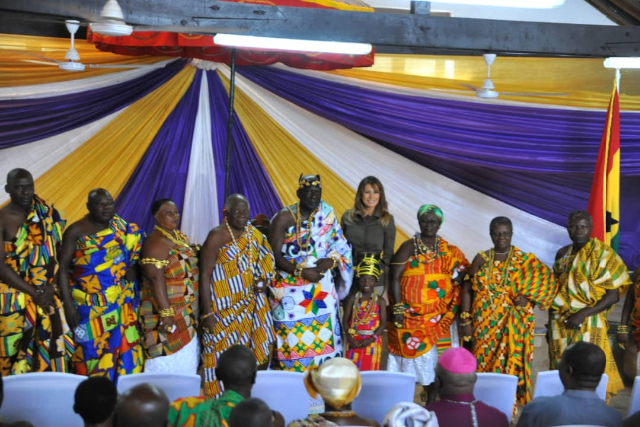 The First Lady of the United States of America (USA), Melania Trump on Wednesday visited the Cape Coast Castle after her brief visit to the Emintsimadze Palace in Cape Coast.

At the encounter with Osabarima Kwesi Atta II, the Chief of the area, the excited American Mrs Trump described her two-day visit to “beautiful” Ghana as a wonderful experience and she is happy to spend time with such “warm people”.

She thanked all Ghanaians for their warm reception since she touched down on Tuesday to start her two-day visit to the country, reports Joy News’ Abubakar Ibrahim.

She said, "dungeon is really something that people should see and experience" and "what happened so many years ago is really a tragedy".

The Castle is one of many in the country which was used as the last place for slaves who were to be shipped to the Americas in the 17th century.

Former and only black American president, Barack Obama, also visited the castle in 2009 with his family.

After a tour of the whole facility, Mrs Trump remarked, "it's very emotional. I will never forget [the] incredible experience and the stories that I heard."

Mrs Trump arrived in the country on Tuesday, October 2, 2018, and was met at the Kotoka International Airport by Ghana’s First Lady, Rebecca Akufo-Addo.

Osabarima Kwesi Atta II said visits like these draw the attention of people who can help remodel the edifice to make it look “better” than it is now.

Addressing the issue of open defecation around the castle beach, the Chief said the issue is being dealt with from different angles.

He stated that “four public toilets have been put up and there are others that are being built for the people to use”.

Osabarima Kwesi Atta II also said the fishermen and elders have been asked to look out for people who continue to defecate along the coast.

According to the Osabarima Kwesi Atta II even though first lady’s visit is relatively short, he said her visit to the Emintsimadze palace was wonderful, impressive and colourful.

“When these visits happen, it makes you feel important and hence live up to that standard,” and makes Cape Coast important to the rest of the world.