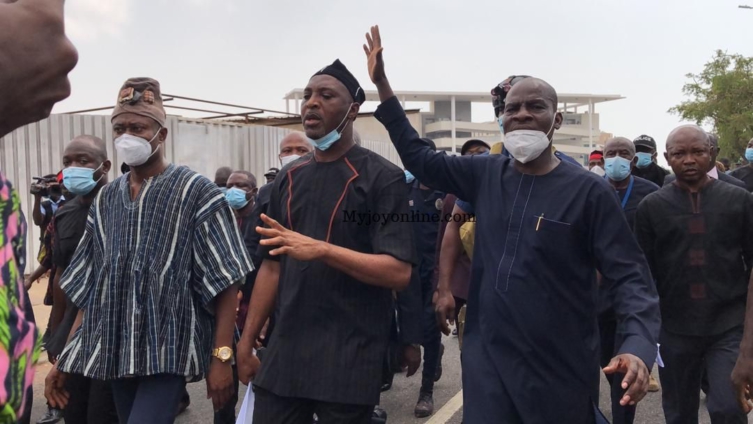 The National Democratic Congress (NDC) Parliamentarians on Tuesday embarked on a march from the House to the Electoral Commission headquarters.

Led by the Minority Leader, Haruna Iddrisu and the Minority Chief Whip, Muntaka Mubarak, the lawmakers sought to petition the EC Chairperson, Jean Mensah over the declared results of the parliamentary election for Techiman South constituency.

But enroute, a scuffle ensued between the police and some NDC legislators after they were prevented from going beyond a barricade around the Ridge Roundabout in Accra.

According to the police, the MPs defied the Public Orders Act since they were unaware of any walk by the Minority to the EC offices.

The party has been protesting the results of the December 7, elections claiming the EC did not execute a fair and fair election.

According to the NDC, its presidential candidate, former President John Mahama won the election but he has cheated thus their calls for auditing of the results.

Also, the party is alleging that some parliamentary seats it won have unjustifiably been handed to the governing New Patriotic Party (NPP).

DISCLAIMER: The Views, Comments, Opinions, Contributions and Statements made by Readers and Contributors on this platform do not necessarily represent the views or policy of Multimedia Group Limited.
Tags:
Election 2020
Election HQ
Electoral Commission