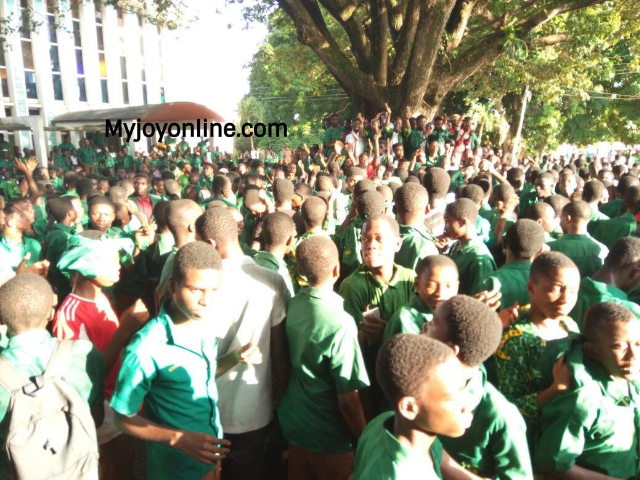 Prempeh College came to a standstill after its heroes at the 2017 National Science and Maths Quiz made a triumphant entry into the campus flashing their trophy.

Students besieged the forecourt of the campus to hail Daniel Osei Badu and Wonder Sarfo-Ansah for their impressive performances at the competition in Accra.

Prempeh College won the trophy by a narrow 2 points over a gritty St. Thomas Aquinas side in a grand finale which also featured dethroned 2016 holders, Adisadel College from the Central region.

Wonder holds the trophy with Daniel Osei Badu standing right behind him as the students wait to address the students. The boys had to endure huge pyschological pressure at the National Theatre in Accra to win their fourth trophy since the competition began in 1994.

Out of 135 schools vying for the trophy, Prempeh College's march to the final included kicking out St. Louis SHS and Toase SHS at the one-eighth stage. They also eliminated 2012 NSMQ winners, GSTS and debutants, Aduman SHS in the quarterfinal contest.

Mfantsipim, Mawuli fell by Prempeh College's sword at the semi-finals stage to progress to the finals.