Photos: Stadium packed as Mahama gets set to blow whistle for 2016 NDC campaign 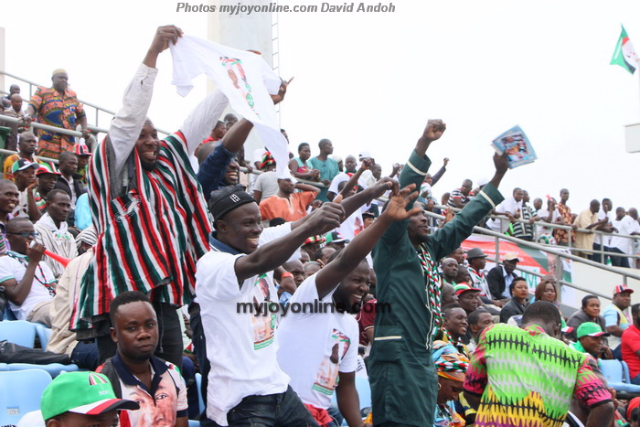 The Cape Coast stadium’s biggest match since it was inaugurated in March this year won’t be a football match.

The stadium will be used to mark a political kick-off for the governing NDC when the party blows a deafening whistle to kick start its 2016 campaign.

The 15,000-seater stadium has reached its limit by Sunday 10;30am, myjoyonline.com, David Andoh reports.

You can call them spectators on any other day but not today. This is the famed NDC grassroot machinery waiting to be oiled by words and the warmth, chants, charges – and maybe cash.

Call them spectators but not today.

Today the party will be hoping that the 15,000 faithful will not be simply caught ball-watching in a season where they are supposed to be matching the main opposition NPP boot-for-boot almost literally in this numbers game of politics called elections.

And it all started 11 months ago when President John Mahama picked up his party's presidential nomination forms, on September 3.

A weak challenge from a 45-year old man, George Boateng, was stifled as the party quickly branded him as mentally unstable.

“That man should be sent to Pantang Hospital because he is suffering,” NDC General Secretary Johnson Asiedu Nketia told the media.

And so on November 7, 2015 with the president, John Dramani Mahama, as the sole candidate, the NDC chose him as the 2016 flagbearer for second time.

With a candidate ready and the campaign far from its official start, the President began a regional tour dubbed ‘Accounting to the People’ on Monday April 4, 2016. Starting from the Western region, the President cut the sod for roads and cut the tape for schools.

He opened several water systems and tasted a drink, distributed ferries and hugged chiefs while the opposition grumbled over what they called abuse of incumbency.

The governing party wouldn’t mind. With no referee yet for the game to whistle foul or play on, the President marched with his strategists and ministers to highlight the “massive” infrastructural developments.

President John Mahama ended his tour on July 9 with his final tour in the Upper West region.

And so it all comes down to this day, Sunday August 14, 2016, at the Cape Coast Stadium where overflowing party supporters stare at three empty seats expected to be filled by the President, his vice-president and party chairman.

The President will fire up the grassroot as he walks them through what he has done with the 2012 mandate. He will tell them about his flagship road project, the $290million Eastern corridor roads that will link the south into the north of the country.

He will talk about the new hospitals littering the districts and the new Military hospital in Kumasi.

He will point to “unmatched” investments in every part of the country and warn them of the desperation of the opposition NPP to drown his efforts with propaganda.

The manifesto can wait. Today, the manifest numbers is enough to sound the warning ‘let the games begin’.