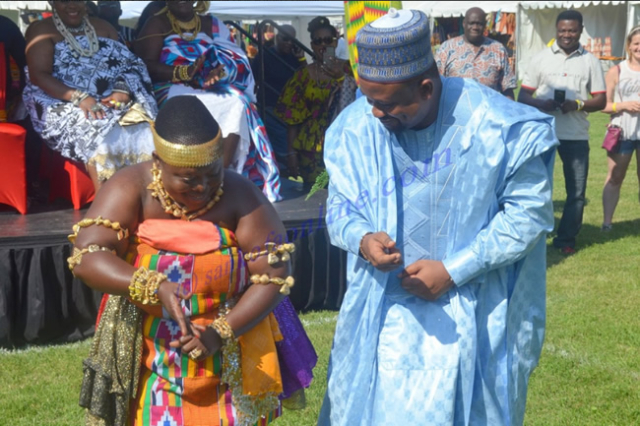 The Deputy Information Minister, Pius Enam Hadzide, became the toast of many attendees of the largest and most remarkable Ghanaian cultural festival in the diaspora, Chicago’s Ghanafest as he wowed the attendees with spectacular dance moves.

Mr Hadzide, took on a challenge by one of the Adowa dancers and graciously danced to the admiration of the huge crowd gathered.

After that splendid performance, the crowd went agog again with loud shouts of admiration and excitement as he voluntarily joined other groups in dancing ‘borborbor’, ‘agbadza’ and others during the procession of the various groups.

This year’s Ghanafest was dubbed “Akwaaba, The Year of Return.”

Started in the late 80’s as a small neighborhood celebration of “Homowo” mainly by the Ga-Dangme Community Organization and the Ghana Chicago Club in the Southside of Chicago.

The festival has since blossomed into a giant celebration of Ghanaian culture. Billed as the largest and most spectacular Ghanaian cultural exposition of its kind in the diaspora, the festival showcases Ghanaian arts, crafts, traditional foods, music and culture.

It attracts an average of 3000 attendants from all over the world every year to Washington Park. The Celebration this year was sensational and an epic extravaganza, which lived up to the media hype and expectations.

The program unofficially started on Friday, July 26th with a poorly attended concert that featured the likes of Amakye Dede and Lil Win.

However, attendance at the main festival overshadowed the poorly attended event the previous day. For the first time in 18 years, the festival was held in two days.

With music giants such as Ben Brako , Samini, etc. on stage, the crowd could not help their joy as they loudly sang along, shout, and dance all evening long! Chicago’s own, Akua Agyeman with the stage name, Sista ELLA, held the revelers spellbound with her solo song titled “Ghana”.

The chiefs, queens, and their royal retinues were adoring and splendid to behold! Adorned in rich traditional Kente fabrics and golden ornaments, the various organizations, which form the Ghana National Council of Metropolitan Chicago (GNC) took turns in a 20-minute procession to portray the Ghanaian rich culture with pomp and pageantry.

To the first generation of Ghanaian immigrants, it was nostalgic to behold! The scene is best witnessed than told! Vendors display and sell African arts and crafts while Ghanaian foods such as waakye, jollof rice, rice and stew, kenkey and fish or stew, kelewele, banku and okra soup etc. were mouthwatering and prominently featured on the menus.

In his speech, Mr Hadzide touted the many achievements of the Akufo-Addo led government.

He apologized for the last-minute cancellation of a scheduled town-hall meeting meant to coincide with the festival.

He assured the community that a new date will be announced in due course.

“We thank you sincerely for your remittances back home. They are a major boost to the economy of Ghana,” he said.

Ace Ghanaian actor, David Dontor, used the occasion and presence of the Deputy Minister to officially launch the new edition of the book “Ghana our Heritage” in the diaspora.

The President of the GNC, Paa Kwasi Sam, urged members of the community to support the council to acquire a community center.

It was estimated that over 4000 people attended the festival.