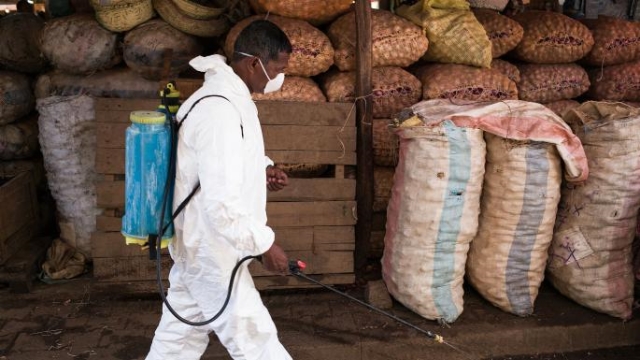 The plague outbreak in Madagascar is continuing to spread at unprecedented rates, with 57 deaths and more than 680 cases.

The latest figures are from October 12. An estimated 329 of these cases, and 25 deaths, were in the capital, Antananarivo.

The cases, reported by both the World Health Organization (WHO) and the National Bureau for Risk and Disaster Management (BNGRC) in Madagascar, include probable and suspected cases as well those that have been confirmed by laboratory tests.

While the country experiences regular outbreaks, with an estimated 400 cases of plague each year, this time things are very different, experts warn.

This year, health officials report the infections started much earlier than usual, and they're occurring in new areas, including urban settings. They've also seen an unexpected number of cases of pneumonic plague, which transmits more easily from person to person.

Of the 684 cases reported as of October 12, 474 were pneumonic plague, 156 bubonic and 1 septicemic plague. A further 54 were unspecified, according to WHO.

Of Madagascar's 114 districts, 35 have reported cases of plague, including at least 10 cities.

Council workers clear garbage during the clean-up of the market of Anosibe in Antananarivo. Rats are porters of fleas which spread the bubonic plague and are attracted by garbages and unsalubrity.

Plague is caused by infection with the bacterium Yersinia pestis and is typically spread through the bite of infected fleas, frequently carried by rats, causing bubonic plague. Symptoms include painful, swollen lymph nodes, called bubos, as well as fever, chills and coughing.

Pneumonic plague is more virulent or damaging and is an advanced form characterized by a severe lung infection. The infection can be transmitted from person to person via airborne droplets — coughing or sneezing. The incubation period is short, and an infected person may die within 12 to 24 hours.

Both forms can be treated with antibiotics, making early detection a priority.

Occasionally there can be cases of septicemic plague, where the infection has spread to a person's bloodstream and can cause bleeding and necrosis of tissue, turning it black.

The government has mobilized resources to spray schools and other public places to fight fleas and rodents and curb the spread of infection. People have also been lining up at pharmacies in the capital — some wearing face masks — to get medications or protection.

To further reduce the spread of the disease, public schools are closed and the government has forbidden public gatherings, according to the International Federation of the Red Cross (IFRC).

"The international community is taking this very seriously," said Daniel Bausch, director of the UK Public Health Rapid Support Team. Launched in 2016, this team consists of clinicians, scientists and academics deployed to tackle outbreaks of disease around the world within 48 hours.

An international response is being mustered to support the Madagascar Ministry of Public Health, with contributions from the UK Public Health Rapid Support Team, WHO, the US Centers for Disease Control and Prevention, Medecins Sans Frontieres (Doctors without Borders), the Institute Pasteur and many others, said Bausch.

WHO delivered more than 1.2 million doses of antibiotics and released $1.5 million in emergency funds earlier this month.

The Red Cross has released more than $1 million to deploy a treatment center and has mobilized more than 1,000 volunteers and is upgrading their skills on community surveillance, finding and monitoring people who have been in contact with infected patients and insightful messaging to stop the spread of this disease.

The treatment center will "take the pressure off the hospitals and clinics so they can handle other issues," an IFRC spokesperson told CNN. "Pneumonic plague can be controlled, so it's really about scaling up treatment and community awareness." The size and location of the center is yet to be confirmed.

The IFRC further stressed the importance of getting local communities in Madagascar to understand the differences in this year's outbreak, as they are used to outbreaks of bubonic plague, spread by rats and fleas, rather than humans.

Why things escalated this year

Though the country is endemic for the plague, the surprising occurrence of cases in cities as well as them presenting earlier than usual meant health authorities weren't ready — fueling a rapid spread of the disease, according to Dr. Charlotte Ndiaye, WHO representative in Madagascar.

Typically, outbreaks occur during the rainy season, between November and March. "The rains drive the rodents out," said Bausch, which also explains why cases are usually the bubonic form.

But this year, cases began three months early, in August.

The outbreak began after the death of a man in the central highlands of the country — a plague-endemic area — after which the Ministry of Public Health began investigating and tracing his contacts, according to the WHO.

In late September, a man from the Seychelles — who was in Madagascar to take part in the Indian Ocean Club Championship basketball tournament — died in a hospital from pneumonic plague. Health officials are urgently tracing individuals who had contact with the man and have started an investigation into the case.

Going up before coming down

"There is still considerable risk of national spread within Madagascar," said Bausch.

Ndiaye agreed more cases are likely to be reported. "We expect there to be a further increase, in part because surveillance has improved and therefore health authorities will receive reports of more cases from more areas," she said.

"We don't have estimations on what is expected," Ndiaye told CNN, adding that everything is now in place to treat people, provide drugs and trace contacts.

"The problem in Madagascar is we have 25 million people and it's a very big island," she said.

While experts predict the number of cases will rise in the coming weeks within Madagascar, there is only a moderate risk of spread within the region — likely to be isolated cases — and a low risk internationally, said Bausch.

Ndiaye agreed that "the risk of international spread is low, because generally, people with plague are too sick to travel."

She explained that WHO is working closely with Madagascar's airport authorities to ensure sanitary measures — such as temperature checks and medical teams — are in place at airports and ports to prevent the spread of infection outside the country. The group is also working closely with neighboring countries.

Travel and trade restrictions have not been advised.

It's "important to recognize that, unlike Ebola, plague is easily treated with antibiotics," said Bausch. "With very good outcomes, as long as detected and treated early."