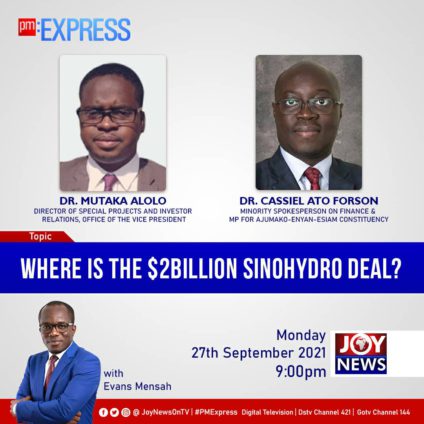 Government entered into a $2 billion Master Project Support Agreement (MPSA) with the Chinese state-run, Sinohydro Corporation Limited in September 2018, to bridge the severe infrastructure deficit in the country.

Under the deal, Sinohydro, a hydropower engineering and construction firm, will finance and execute the construction of infrastructural projects across the length and breadth of Ghana in exchange of access to sites to mine bauxite.

But the Minority in Parliament has expressed concern that the $2 billion deal between Ghana and Sinohydro will only add up to the debt stock of the country, thereby, further burdening the already burdened taxpayer.

There has been a delay in the execution of these projects, however, government says there is no cause for worry.

Meanwhile, in a documentary titled “Where is the $2 billion Sinohydro deal?” JoyNews’ learned that government has only managed to access $100 million for the first phase of the project.

Tonight on PM Express, host Evans Mensah engaged the Director of Special Projects and Investor Relations at the Office of the Vice President, Dr Mutaka Alolo and Minority Spokesperson on Finance Committee, Dr Cassiel Ato Forson to discuss the status of the Sinohydro deal.