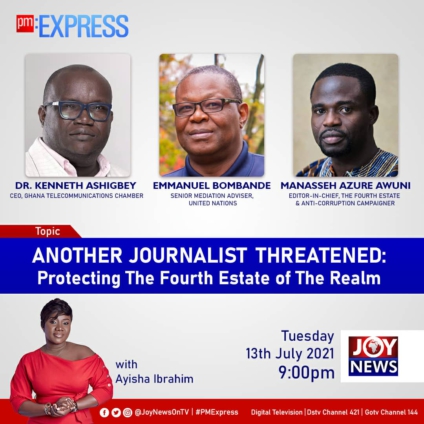 The Member of Parliament (MP) for Assin Central, Kennedy Ohene Agyapong was on Friday, July 9, reported to have verbally abused and threatened to attack Mr Erastus Asare Donkor, a journalist with the Multimedia Group, for the journalistic work that he (Erastus) did during the recent shootings and killing incident at Ejura.

The legislator was filmed on a live programme, on Net 2 TV, a television station owned by the MP, making those threats, which was widely published on social media platforms. Mr Agyapong stated among others, that, if he [Mr Agyapong] were President, he would have ensured that Erastus Asare Donkor is beaten mercilessly.

For threatening the life of the journalist, the Multimedia Group filed a formal complaint to the Deputy Regional Commander, Ashanti Region, against Mr Agyapong and called for a thorough investigation into the threats issued by the politician.

On the back of the recent happenings, Joy News‘ Ayisha Ibrahim hosts Chief Executive of Ghana Telecommunications Chamber, Dr Kenneth Ashigbey, Senior Mediation Advisor of United Nations, Emmanuel Bombande, Editor-In-Chief of the Fourth Estate and Anti-Corruption Campaigner, Manasseh Azure as they discuss the seeming threat to the fourth estate of the realm.