Playback: The Law discusses the legality of toll suspension and rejection of 2022 budget 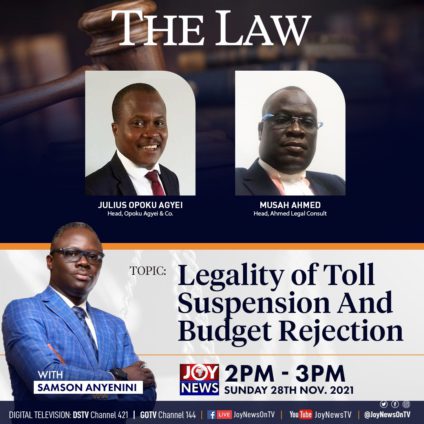 Just hours after the Finance Minister had presented the 2022 Budget statement and economic policy, which contained a proposal to abolish road tolls for the next fiscal year, the Road Minister in a statement had directed that collection of road toll be stopped.

He added that the personnel who worked there, would be reassigned.

This did not go down well with the Speaker of Parliament, Alban Bagbin who immediately ordered that the Minister withdraws the directive.

According to Mr. Bagbin, Kwesi Amoako-Atta the Roads Minister lacks the legal mandate to implement a policy proposal when it has not been approved and passed by Parliament.

“It is a proposal they are presenting to us to approve to take effect January, 2022. And so until this budget is approved, all that is contained in the budget are proposals. We have the authority to approve.

However, the Roads and Highways Ministry replied to the Speaker stating that the directive issued by the Ministry for the cessation of road toll was to suspend the operationalisation of the toll and not the law.

A press release issued from the Ministry of Roads and highways indicated that the earlier directive by the Minister, Kwesi Amoako-Atta to suspend the collection of toll by 12 am on Thursday was to “avert some unfortunate events” that happened at toll booths across the country.

Today on The Law, host Samson Lardy Anyenini and his guests will be interrogating the legality of the Minister’s actions.

They would also be analyzing the legality of the rejection of the 2022 Budget statement by the Minority.

According to the Majority Leader, Osei Kyei-Mensah-Bonsu, the Minority did not have the required number of MPs in Parliament to make that move, thus, the Budget is not rejected.

DISCLAIMER: The Views, Comments, Opinions, Contributions and Statements made by Readers and Contributors on this platform do not necessarily represent the views or policy of Multimedia Group Limited.
Tags:
2022 budget rejection
Road tolls
The Law