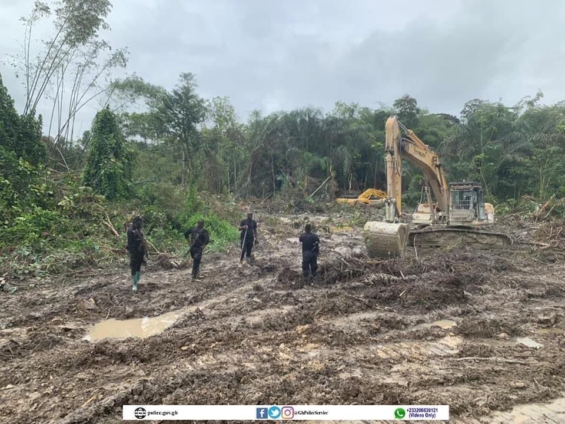 Police in the Western Region have arrested the District Chief Executive (DCE) of Ellembelle, Kwasi Bonzo.

This comes days after Mr Bonzo, his personal assistant, and one other person were placed under police investigation for the disappearance of two mining excavators in the district.

Sources say Wednesday’s arrest ensued when the DCE caught wind that the police had recovered an excavator similar to what had been reported missing.

Eyewitnesses told JoyNews Western Regional Correspondent, Ina-Thalia Quansah that the DCE followed up in the Ayisakrom in the district.

There, Kwasi Bonzo is said to have confronted the security officials resulting in a scuffle.

Eventually, he was bundled into a police vehicle and transported to the headquarters in Sekondi.

Meanwhile, police have confirmed the arrest.

In a post on social media, the Service explained that a team of operations and intelligence officers working day and night discovered the missing excavator several kilometres into a forest within the Ellembelle District.

“The Police through days of intelligence operations yesterday, September 6, retrieved one of the excavators that were reported missing from Ellembelle.”

The statement further explained that “while the team of police officers were escorting the excavator to Takoradi, at the Axim Junction, the DCE of Ellembelle, Mr Kwasi Bonzo organised and led some thugs to attack the police and obstruct the operation. The DCE and three others were therefore arrested accordingly.”

Investigation continues to recover the other excavator and arrest all those who are connected to the case for prosecution.

DISCLAIMER: The Views, Comments, Opinions, Contributions and Statements made by Readers and Contributors on this platform do not necessarily represent the views or policy of Multimedia Group Limited.
Tags:
Arrest
Excavator
Police