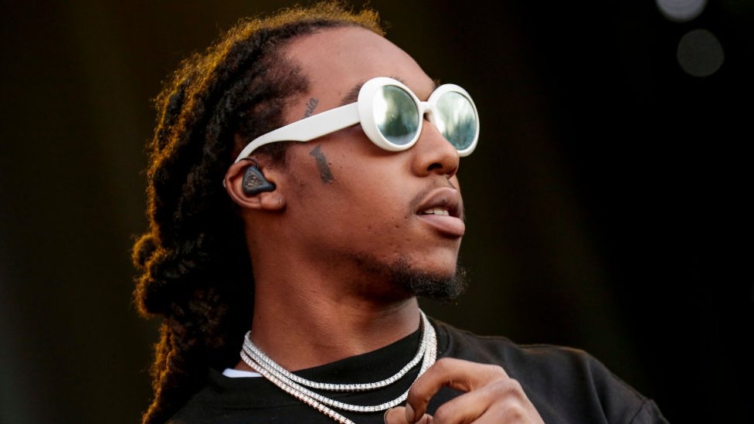 Takeoff, one-third of popular rap group Migos, was shot and killed on 1 November

Police have arrested a man and charged him with murder in connection with the fatal shooting of rapper Takeoff.

The 28-year-old Grammy-nominated musician was shot and killed outside a bowling alley in Houston, Texas last month.

Houston police said the shooting was over a game of dice, but the singer was “an innocent bystander”.

Takeoff was the youngest member of rap group Migos, and his death was mourned by fans and fellow musicians.

At a Friday press conference, Houston Police announced they arrested Patrick Xavier Clark, 33, with the help of surveillance footage that was obtained from the night of the shooting.

“[Clark] was there on the scene and he was in possession of a weapon,” said Houston Police Chief Troy Finner.

He added that an investigation is still ongoing, and he has appealed for witnesses to come forward and share information with the police.

“Don’t let the fear paralyse you,” Chief Finner said in his appeal. “Step up and say something.”

Mayor Sylvester Turner of Houston said he hopes the arrest will bring some comfort to the family of Takeoff.

He added that Takeoff was more than an entertainer, but also a “son, brother, cousin and a friend, and a mentor to those in the music industry”.

Takeoff, born Kirsnick Khari Ball, was one-third of the chart-topping Atlanta-based rap group Migos, who is known for several hits like Bad and Boujee and Stir Fry.

His death was met with an outpour of tributes from fans and musicians like Drake, Kid Cudi, Dave and Rick Ross, who remembered Takeoff as “young legend” and a pioneer of a distinct style of rapping known as the “Migos flow.”

The 28-year-old musician was one of three people shot outside a downtown bowling alley in Houston at 02:30 local time (07:30 GMT) on 1 November, after a dispute erupted at the end of a private party after a dice game.

Sgt. Michael Burrow with the Houston homicide division said on Friday that Takeoff was not involved in playing the dice game or the argument that took place outside the alley, and he was not armed.

“He was an innocent bystander,” Sgt. Burrow said.

Another man and a woman suffered non-life-threatening injuries during the shooting.

Cameron Joshua, 22, was also arrested in connection with the shooting on 22 November and charged with unlawful carrying of a weapon.

DISCLAIMER: The Views, Comments, Opinions, Contributions and Statements made by Readers and Contributors on this platform do not necessarily represent the views or policy of Multimedia Group Limited.
Tags:
Patrick Xavier Clark
Rapper Takeoff
Shooting