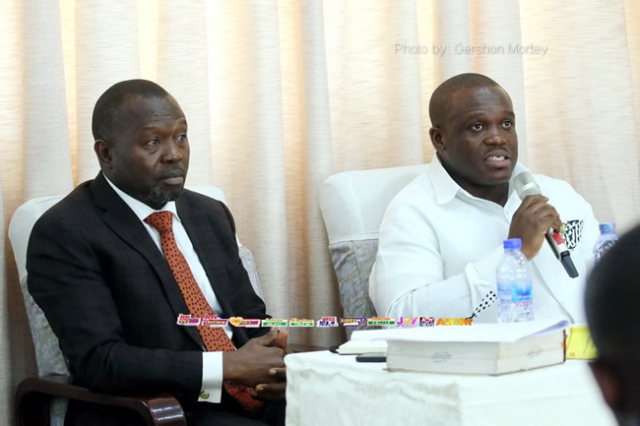 Counsel for Ningo-Prampram MP, Dominic Ayine said his client did not give the police shell casings he had received following the shooting incident during the Ayawaso West Wuogon by-election because, they cannot be trusted.

The MP, Samuel George during his testimony to the Emile Short Commission tasked to investigate the violence that characterised the by-election in January admitted to having received some shell casings from firearms that were fired by some security personnel on voting day.

He had said the 29 casings, given to him by a man he did not know, were collected after the shooting spree in front of the NDC candidate’s house close to the La Bawaleshie polling centre.

The Commission, however, after reading through the statement Mr George gave to the police, found that he made no mention of the shell casings in his possession in the report.

In a response to why he did not include in his statement he had the shell casings, the MP said “my trust in the Ghana Police Service has been shaken by them standing aloof when I was being assaulted. Even though there were armed policemen who could have intervened, they didn’t.”

His lawyer agrees with him. Dr Ayine said his client, after the experience he had had, could not be blamed for being unwilling to inform them about the evidence in his possession.

Speaking to Joy News’ Evans Mensah on Top Story, he acknowledged that although withholding evidence from the police could be an offence, his client could not be blamed for the decision he took.

Citing the case where a substance believed to be cocaine turned into baking soda while it was in the possession of the police, the lawyer said Mr George could not guarantee the safety of the evidence in the hands of the police.

When asked if he believed per that analogy that the shell casings could disappear if given to the police, Dr Ayine, said, “of course, that is a possibility.”

He added that Mr George’s decision should not be surprising because he was turned away by the police when he went to them to make a statement on what occurred during the elections.

“If you were in that situation, will you trust the police to be able to hand over shell casings to them,” he queried, adding “and there were other developments… the NDC supporters who were shot at were being treated as if they were the aggressors and they were arrested and questioned as if they were the perpetrators and not the victims of what had happened.

“So in the context of all of that, do you want to hand over evidence to the police who had already taken sides on this matter,” he questioned.

In any case, Dr Ayine believes his client’s refusal to tell the police about the shell casings does not stop the Commission from doing its work as it has vast powers with respect to how it treats evidence it receives.

“If they are serious about this aspect of the evidence, they should go ahead and do a forensic ballistic analysis of the shell casings to establish whether or not they came from arms that were issued to the persons who did the firing.”

In his view, Mr George’s refusal to inform the police about the casings is “not fatal to the case that can be made as compared to whether or not shootings had taken place.”