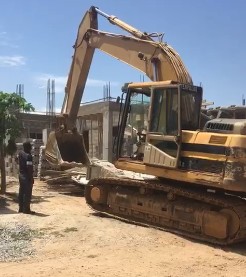 The Dansoman Police Command has impounded an excavator and a pickup up used to demolish a three storey building apartment.

The exercise said to be unlawful was carried Friday by some individuals allegedly from the Christ Apostolic Church.

Sources say the police upon arrival at the demolishing site requested a court order but the workers could not present the needed document.

The demolishing exercise follows a disagreement between one Benjamin Thomson and the Christ Apostolic Church who both claim ownership of the piece of land.

According to Mr Thomson, he acquired the piece of land in 2002 but the Church says it received the land for free in 2019.

The bone of contention between the two, Mr Thomson says resulted in the caretaker of the property, Nana Owusu being attacked by some land guards in an attempt to stop the demolishing exercise.

Attempts to obtain comments from the Christ Apostolic Church on the matter have been unsuccessful.

Meanwhile, the issue has now been taken up by the Anti Land Guards and Property fraud office.