Police, insurance entities must ensure sanity and safety on our roads – NIC boss 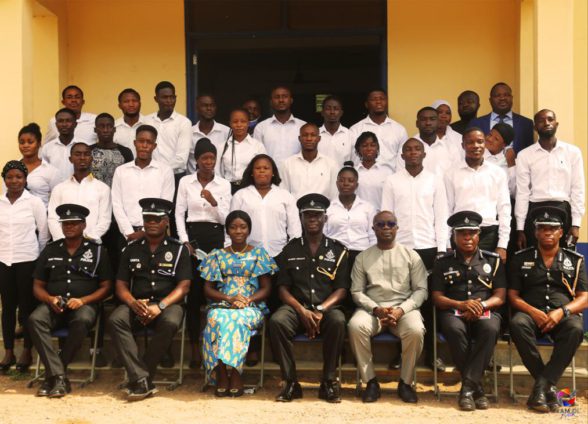 The Commissioner of Insurance of the National Insurance Commission (NIC), Dr Justice Ofori, has underscored the need for ensuring sanity and protection on the roads.

According to him, the onus does not only lie on vehicle owners, drivers and road users, but it is also a core responsibility of the Police and Insurance entities.

Dr Ofori, in a speech read on his behalf, the Acting Head of Supervision of the NIC, Stella Jonah, said, “ensuring sanity and protection on our roads are legally and mandatorily provided by two functions; the Police and insurance”.

The statements was made during orientation of National Service Personnel (NSPs) posted to serve under the Urban Traffic Management (UTM) module of the Motor Traffic and Transport Department (MTTD) of the Ghana Police Service at the National Police Training School in Accra.

The NIC Commissioner pointed out that “globally, the practice and process of insurance are constantly changing, and in Ghana, innovation and digitisation have contributed to this change.

This is in line with the government’s digitisation agenda that birthed the Motor Insurance Database (MID), which was implemented in January 2020.”

“The objective of the MID is to curb the menace of vehicles with fake motor insurance stickers plying our roads, thus endangering lives and property. Therefore, to ensure effective implementation of the MID, the Commission relied heavily on the MTTD”, he disclosed.

“The conduct of random checks across the country, which were facilitated by the USSD short code *920*57# together with the use of GoTa phones have made the MID a roaring success, and the Commission has the Police MTTD to thank for its commitment to this national cause”, Dr Ofori added.

The Director-General of the Police MTTD, DCOP Francis Aboagye Nyarko, commended the NIC for its support towards the orientation and called on the National Service Personnel to be disciplined in the discharge of their duties as we approach the festive season.

“The MTTD as a law enforcement agency is poised to reduce the level of carnage and traffic congestion on our roads during the Christmas and new year celebrations. The objective is to ensure that the yuletide is celebrated in sanity and serenity devoid of an upsurge in traffic crashes”.

“The course”, he said, “will instil in you the needed knowledge to help carry out the monumental task ahead”, he told the participants.

The three-day orientation programme on insurance and other aspects of road traffic regulations is supported by the NIC and facilitated by the Ghana Insurance College (GIC).

The orientation is centred on the basic principles of insurance and the MID, which is of utmost relevance to the personnel deployed to ensure motor traffic regulations and safety on our roads.

The Executive Director of the National Service Scheme (NSS), Osei Assibey Antwi, used the occasion to encourage them to take advantage of the opportunity granted to serve the country.

He further advised the participating service personnel to work hard as some stand the chance of being enlisted into the Police Service at the end of their stint.

This, he believed, would also contribute to reducing the rate of unemployment in the country. In addition, he cited the virtues of humility and time consciousness as factors that will make them excel in life.

The NSS Boss encouraged National Service Personnel posted across the country to acquaint and adapt themselves to the different beautiful cultures regardless of wherever they have been assigned to serve.

In October 2020, the NIC launched and commenced the nationwide training of National Service Personnel posted to the MTTD.

This was further extended to cover other security agencies, including the Ghana National Fire Service (GNFS), in the NIC’s insurance awareness creation drive.

The continuous training modules have the broad objective of creating insurance awareness and providing an avenue for all to develop an interest in an insurance career.