Police investigate assault of man by MTTD officers at Asankrangwa 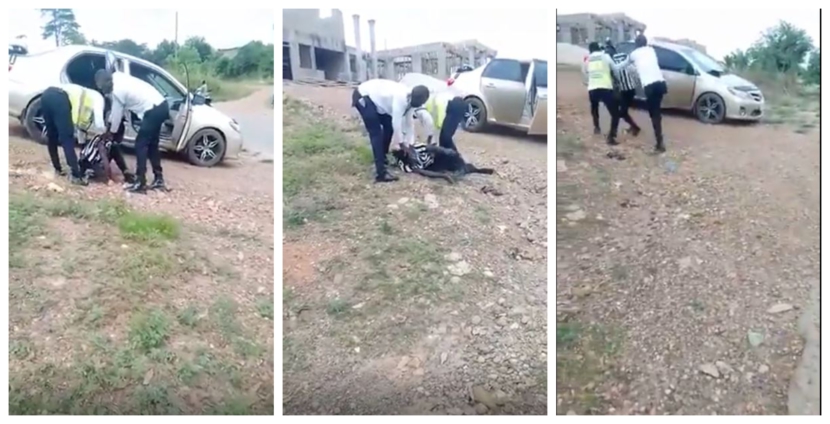 The Police have commenced investigation into circumstances leading to the assault of a man by two MTTD Police officers at Asankrangwa in the Western North Region.

According to a statement issued on Tuesday, the officers seen in the video; Inspector Prince Awuah and G/Cpl. John Ahiamata, both with the Divisional MTTD Asankrangwa, have been referred to the Police Professional Standards Bureau.

The statement indicated that the victim has also been contacted to assist with the investigation.

In the video which has gone viral, the two MTTD Police officers were seen physically assaulting a man over a bag the officers suspected contained marijuana (weed).

The suspect was said to be in the company of another man at the back of a Pragya tricycle which was stopped at Asankrangwa Newtown, between Asankrangwa and Asankran-Odumasi.

The Asankrangwa Divisional Police Command MTTD personnel enquired about the owner of a bag at the back of the Pragya.

Though it was quickly determined that the suspect was the owner, he denied ownership, thus was brutalised by the officers.

Meanwhile, some residents who looked on blamed the suspect for not admitting to the allegation and pleading for his release.

The tricycle rider and the passenger were allowed to go.

DISCLAIMER: The Views, Comments, Opinions, Contributions and Statements made by Readers and Contributors on this platform do not necessarily represent the views or policy of Multimedia Group Limited.
Tags:
Asankrangwa
Assault
Police