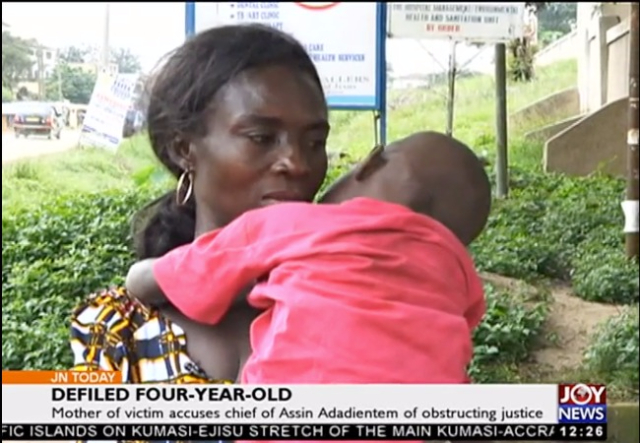 The Assin Fosu Divisional Police Command has invited chief of Assin Adadientem to assist them in locating the suspect who allegedly defiled a four-year-old girl.

The chief is said to be the suspect’s cousin, whom the victim's mother had earlier reported the incident to.

He dismissed the traumatised mother, telling her that the gods had declared the suspect innocent.

Police in the district have also delayed in taking an action against the suspect named by the victim as Kwabena, although the victim’s father reported the incident to them.

According to the police, they do not know the said area where the incident occurred and needed the complainant’s assistance to locate the place.

Related: Gender Ministry must wake up to deliver justice to defiled 4-year-old – Activist

His unavailability after he reported the case, the police said, has resulted in the delay in the suspect’s arrest and any other action that could have been taken concerning the case.

A national outrage at this absurdity by the police has however caused the top hierarchy of the police to intervene in the case, ordering the Central Regional Police Command to take over the investigation of the case.

Joy News, Central Regional Correspondent, Kojo Nyarko reported on Friday that the police have ordered the chief to report to their outfit to help them grab the suspect.

The police also believe that a further involvement of the community members in the investigation will make the search for the suspect easier since they know him.

The community members, for them, hold the key to finding the suspect who has bolted since he committed the incident.