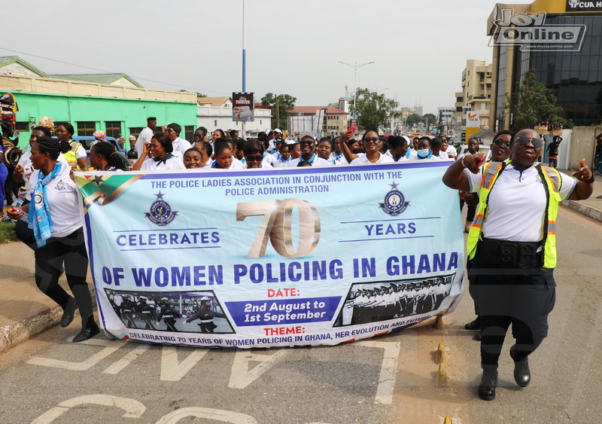 Ghana Police Service Ladies Association, in partnership with the Police administration, has organised a float as part of activities to mark 70th anniversary of the establishment of the Association.

The float took them through some principal streets of Adabraka. The lady officers who were clad in their ceremonial T-shirt were seen singing and dancing.

Under the theme, “Celebrating 70 Years of Women Policing-Her Evolution and Future,  the programme was used to create an awareness about domestic violence which include child marriage and sexual harassment.

Alongside the float was a health screening exercise for the Police ladies. The medical personnel were drawn from Ghana Police Hospital.

In an interview with myjoyonline, an Executive Member of the Greater Accra branch of the Association, Chief Superintendent Rev. Faustina Asare said the programme is a seasonal event which they use to educate the general public on effects of domestic violence.

She said the Police administration has given great opportunity to young ladies who qualified to be recruited into the Service.

She commended the leadership of the Police administration for paying particular attention to the ladies, especially giving them the opportunity to compete with their male counterparts, which according to her, has made Police ladies competent in their various fields of operations.

DISCLAIMER: The Views, Comments, Opinions, Contributions and Statements made by Readers and Contributors on this platform do not necessarily represent the views or policy of Multimedia Group Limited.
Tags:
aniversary
association.
police ladie