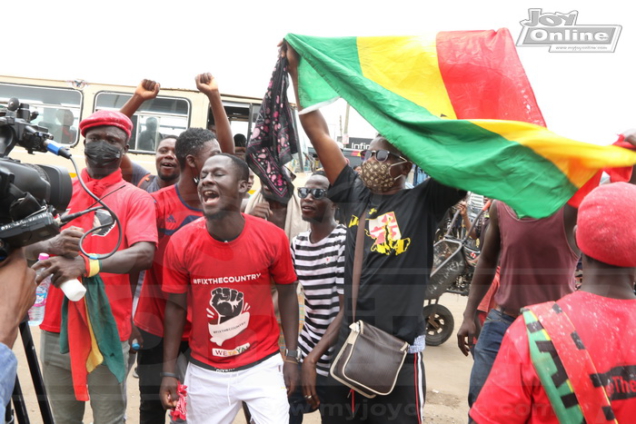 The Police have, however, explained that “the execution of the bail is dependent on the Court and not the Police.”

The Court on Wednesday granted Mr Barker-Vormawor a ¢2 million bail with two sureties.

According to the Service, Mr Barker-Vormawor was taken back into custody despite being granted bail because the Court Registrar, who has submitted documents from the sureties, as one of the conditions of the bail, is yet to receive a response from the Lands Commission.

But the Movement in a press statement has described as “misleading” the Police statement noting that Oliver Barker-Vormawor is in custody to await the completion of the bail process.

The Movement narrated that as of 1 pm on Wednesday, formal processes pertaining to the bail had already been concluded with eminent professors who had come to stand surety for the accused.

Despite this, the Registrar according to the Movement, who ordinarily closes at 3pm, “agreed with his lawyers that he was prepared to wait until 5pm to ensure the process was completed.”

However, “the Police refused to send him (Oliver) back to the Court to enable him to sign the documents.”

The Movement noted that the situation prompted Oliver to demand to be sent back to his cell to commence his hunger strike.

“Oliver also indicated to the Police that he will no longer receive any visitors, including family or lawyers until the Police begin to show some respect for our democracy by acting as an institution guided by law,” it added.

According to the #FixTheCountry Movement, the Police, led by the Tema Regional Commander, only decided to act at a later period after news broke that there are attempts to frustrate the execution of the bail granted to Oliver.

The Movement stated that the Registrar who had left for home, an information privy to the Police, was called to return to the Court on the orders of the IGP.

“In our presence, they told the Registrar to write a letter directed to the Lands Commission under the pretext that he was verifying the documents. This is despite the fact that the documents bore the seal of the Commission.

The Registrar informed them that the process can take three days to one month. They insisted that he does that,” the Movement further recounted.

For the Movement, its is appalled that Ghanaians must throng the Lands Commission to validate their land documents amidst the era of technological advancement.

Again, the Movement has said it deplores “the calculated attempts by the Ghana Police Service and whatever interests they are acting on behalf of, to use administrative processes which have been intentionally convoluted to frustrate the order of the Court and undermine Oliver’s right to liberty.”

Therefore, it has urged the Police to serve the citizens of Ghana with “integrity and not ingenuity.”

“We demand the immediate release of Oliver now,” the Movement concluded.

DISCLAIMER: The Views, Comments, Opinions, Contributions and Statements made by Readers and Contributors on this platform do not necessarily represent the views or policy of Multimedia Group Limited.
Tags:
#FIxTheCountry
Oliver Barker-Vormawor
Police
Tema High Court