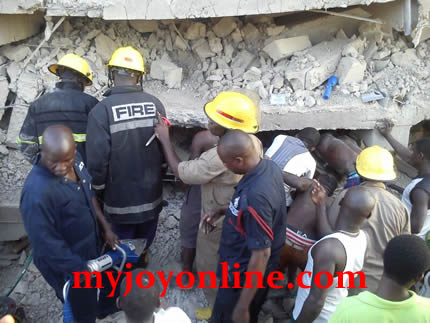 Owner of the collapsed six–storey building at Nii Boi Town, Mr. S.K Omari is yet to be charged by the police.

The uncompleted structure in Accra collapsed in the early hours of Thursday leaving one person dead and another hospitalized.

Though the Tesano Divisional Police Command has taken a statement over the issue from Mr. Omari, it is yet to charge him with any offense.

Public Relations Officer of the Greater Accra Regional Police, DSP Freeman Tettey said the statement received from the owner of the collapsed storey building will be very useful for police investigations.

According to him, Mr. Omari has been asked to report at the police station as and when he is needed by the police.

DSP Freeman Tettey also debunked earlier media reports that the police had arrest the owner of the collapsed building.

Meanwhile, the Accra Metropolitan Assembly (AMA) has interdicted three building inspectors, who work at the Okaikoi North Sub-metro of the Assembly for six month without pay, after the incident occurred.

A statement signed by the Mayor of Accra, Dr. Alfred Okoe Vanderpuije, said the three are liable for acts of negligence as they failed to follow proper procedure in their monitoring activities.