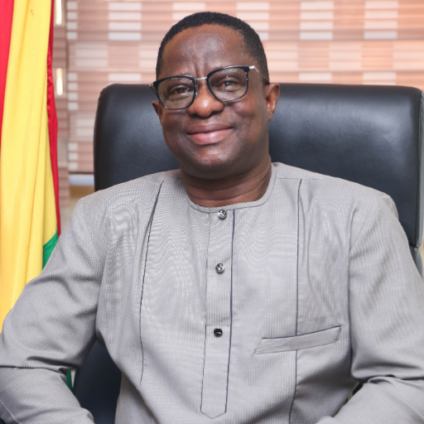 Energy Minister John Peter Amemu says despite challenges associated with governance, President Akufo-Addo has done his best to ensure development in the country.

On a scale of 10, Mr. Amewu rated the President 9.5 in terms of development.

According to Mr. Amewu, politics is all about development and that is what the President has ensured since he assumed office as President in 2017.

“We are not 100 percent sure, I mean in every economy there are difficulties and downturns but we have capitalized on the downturns and moved them to positive levels,” he said.

President Akufo-Addo on Saturday, June 27 was inaugurated as flagbearer for the governing New Patriotic Party (NPP), after the party gave him another nod to represent it in the upcoming 2020 elections.

Speaking on the sideline of the event, Mr. Amewu indicated that the President’s constant efforts to ensure development in the country is one of the factors that has led the party to give him another chance to lead them.

“I must say with all level of confidence that, improvement and transformations in social lives by the Akufo-Addo led government within these past four years outweigh the negatives.

“Politics is not necessarily about the party but it is also about the development the person in the party is bringing and that is exactly what we are looking at,” he said.

DISCLAIMER: The Views, Comments, Opinions, Contributions and Statements made by Readers and Contributors on this platform do not necessarily represent the views or policy of Multimedia Group Limited.
Tags:
Akufo-Addo
Akufo-Adoo Inauguration
Energy Minister
John Peter Amewu
NPP Inauguration