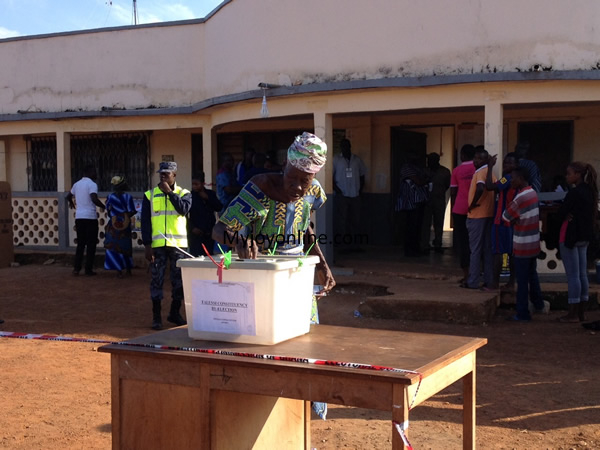 Voting has begun in earnest in the Talensi constituency in the Upper east Region where the people are electing a new Member of Parliament.

The seat became vacant after the former MP Robert Mosore was enskinned the paramount chief of Tongo.

A total of 39, 523 voters are expected to cast their ballot in the 74 polling stations in the constituency.

Some voters who spoke to Joy News’ Albert Sore at the Tongo Community Centre Polling Station say the process has been smooth.

"When I entered the process was totally smooth for me I didn’t face any challenges. I didn't have any finger print challenges or anything of that sought", the first voter told Abert.

The stakes are high for the vacant seat, particularly between the New Patriotic Party (NPP) and the National Democratic Congress (NDC).

NPP Vice-Presidential candidate Dr Mahamudu Bawumia (smock) and NDC MP for Akwatia (in cap) are observers in the election.

According to the NPP Flagbearer, Nana Akufo-Addo, retaining the seat after close of polls Tuesday will prove his party is well placed for victory in the general elections in 2016.

The NDC is also hoping to win the seat especially because the party has had the seat in the  constituency for 20 years before its reign was ended in 2012.