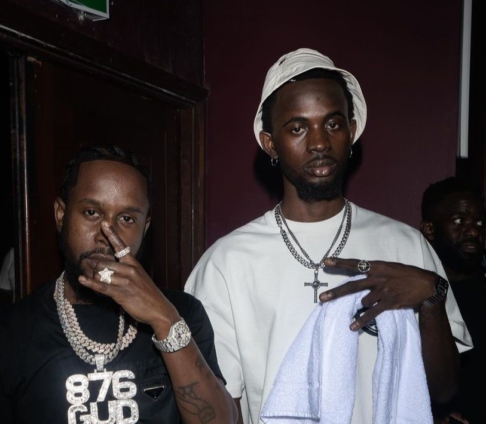 Ghanaian rapper, Black Sherif and Jamaican dancehall artiste, Popcaan have a collaboration on the way.

Popcaan took to Instagram to share with fans a teaser of the song, giving them an insight into what they should expect.

Black Sherif was heard rapping in the seven-second snippet.

It is however unclear when the track will be released and the exact nature of the collaboration.

🇯🇲Jamaican reggae and dancehall singer Popcaan (@PopcaanMusic) has teased out his yet-to-be-released project with🇬🇭 Ghana’s Black Sherif via IG Stories. The duo were earlier seen chilling at the backstage of @BurnaBoy’s 🇬🇧UK concert 2 weeks ago. pic.twitter.com/8wXFQOczbe

The collaboration seemed to have happed when the duo got together in London last two weeks where they both performed at Burna Boy’s concert.

They were also seen having a good time backstage at the Nigerian artiste’s Kingston Upon Thames event.

The rapper took to his Instagram Stories on Tuesday, July 19, to share a screenshot of Black Sherif’s recent hit Kwaku The Traveller.

Later in the day, DJ Khaled posted a video of Black Sherif singing the hit Kwaku The Traveller when it was first released.

He called the song “music that touch(sic) your soul.”

During the weekend DJ Khaled shared a video of himself jamming to Kwaku The Traveller in his car while cruising through town.