Portland police use tear gas, arrest over 20 after declaring ‘riot’ 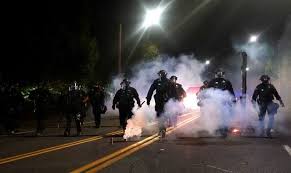 Portland police used tear gas on protesters and made 23 arrests as it declared a demonstration against police brutality a “riot” late on Sunday, saying a group of over 200 demonstrators lit fires and attacked officers with lasers, mortars, rocks and bottles.

“Arrests were made and crowd control munitions were used,” the statement said, describing members of the crowd which had gathered in the U.S. city’s North Precinct as wearing black and carrying shields, helmets and gas masks.

The 23 arrests were made on charges like disorderly conduct, assault, riot and interfering with a peace officer, the police said, adding the arrested individuals were booked in the Multnomah County Detention Center.

In a Twitter post bit.ly/2ErTEY8 earlier, the police had asked the gathering to disperse, adding that a failure to comply with the order could lead to arrests and crowd control agents, “including tear gas and impact weapons.”

Police had also declared a riot just before midnight on Saturday after a group of about 250 people tried to march on a government building that has often been the scene of clashes between protesters and officers during nearly three months of nightly protests.

There were 14 arrests made in that event.

Demonstrations against racism and police brutality have swept the United States since the death in May of George Floyd, a 46-year-old Black man who died after a Minneapolis police officer knelt on his neck for nearly nine minutes.

Previously in June, a federal judge had issued a 14-day temporary restraining order on the Portland Police Bureau’s use of tear gas, citing concerns over officers using excessive force on demonstrators.

President Donald Trump’s administration in July deployed federal forces to the city to crack down on the protests.

On Friday, he denounced the demonstrations as “crazy” and said cities run by Democrats had descended into chaos. Portland Mayor Ted Wheeler is a Democrat.

Portland police said last week that they had declared riots 17 times between May 29 and Aug. 19.