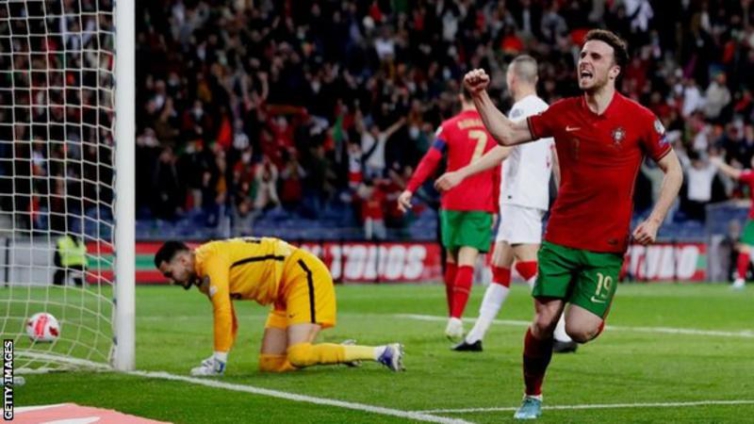 Portugal kept their hopes of reaching the 2022 World Cup alive as they beat Turkey after the visitors missed a late penalty in the play-off semi-final in Porto.

First-half goals from Otavio and Diogo Jota put the hosts in control at Estadio do Dragao and they looked to be cruising into the play-off final before Turkey responded.

Burak Yilmaz side-footed into the bottom corner with 25 minutes remaining to set up a nervy finish but then fired over the crossbar from the penalty spot.

Matheus Nunes added a third for Portugal in stoppage time to put the game beyond Turkey.

Fernando Santos’ side, denied automatic qualification from the group by Serbia, will now face North Macedonia on Tuesday for the chance to book a place in Qatar.

Portugal were no doubt expecting to find Italy waiting for them in their play-off final, but Aleksandar Trajkovski’s stoppage-time winner earned North Macedonia a shock win against the European champions.

“These games are finals. Finals are always complicated,” said Portugal boss Santos. “We won the first one and now we have to win the second. That’s what we’re going to focus on.

“This game is over. Now we have to focus on North Macedonia, which will be a difficult game for sure. If they managed to beat Italy that means it’s going to be very difficult.”

Hosts make hard work of it

In Porto, the final score made this look like a comfortable win for Portugal and it would have been if the hosts had capitalised on their dominance earlier in the game.

A stretching Jota somehow turned Bruno Fernandes’ dipping free-kick over the crossbar from close range before Portugal broke the deadlock after 15 minutes.

Bernardo Silva struck the post with a low effort and the ball ran across the goalmouth into the path of Otavio, who squeezed in from an angle despite the best efforts of goalkeeper Ugurcan Cakir.

Turkey then began to play and had half chances of their own, with Kutlu heading wide at the far post, before Portugal doubled their lead.

Captain Cristiano Ronaldo started a neat move with a lovely flick and the hosts worked it well to Otavio, who picked out Jota and the Liverpool forward powered a header into the net.

That seemingly put Portugal in command but they failed to extend their lead when Otavio headed wide in the second half and against the run of play Turkey responded.

A swift move from the hosts allowed Yilmaz to finish smartly and the 36-year-old was then presented with a huge opportunity after Jose Fonte caught Enes Unal in the box, a penalty awarded after the referee consulted the pitchside monitor.

But Yilmaz lent back and sent his effort sailing over the crossbar, before Portugal wrapped up their progression in added time when Nunes beat the offside trap to finish smartly.