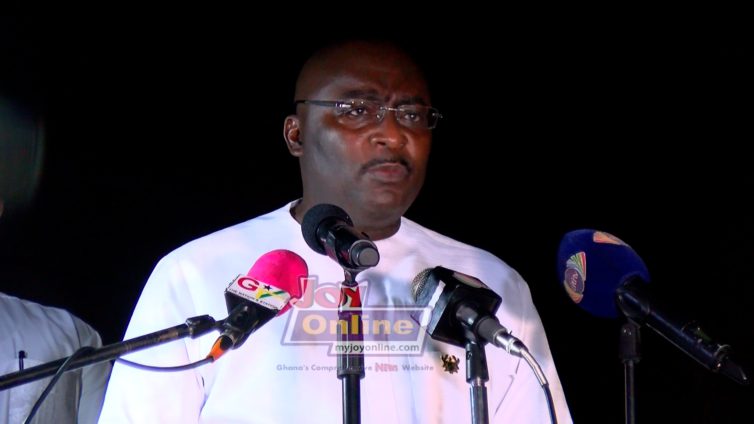 Vice President Dr Mahamudu Bawumia has implored religious bodies to pray for Members of Parliament to prevent chaos in the House.

Members of both the Minority and Majority Caucuses in Parliament engaged in fisticuffs during deliberations on the controversial E-levy Bill in recent times.

In what has been widely condemned by many, the MPs were seen pushing one another in fierce anger and disagreement on December 20, 2021.

But speaking at the St. Peters Cathedral Minor Basilica church in Kumasi during the December 31 watch night service, Mr Bawumia urged Ghanaians to keep the President and lawmakers in prayers.

He noted that this would ensure they needed wisdom and fortitude to govern the country.

The Vice President also stressed that could minimise the instances of chaos on the floor of Parliament if Christians make it a duty to remember the MPs in their intercessions.

“Pray for the President of the Republic, Nana Addo Dankwa Akufo-Addo, for the Lord to grant him the wisdom to properly govern this country to ensure development. Pray for peace in the country.”

“Pray also for our Members of Parliament so that there wouldn’t be chaos on the floor of the House. We need peace in Parliament. I hope the parliamentarians here have heard it,” he said.

The recent agitations in Parliament have been condemned by some analysts who say they undermine the legislative authority of the House.

The Editor-in-Chief of the New Crusading Guide newspaper, Abdul Kweku Baako, has noted that the MPs’ ‘dishonourable’ behaviour taints Ghana’s image on the international stage.

“It affects Parliament itself, its moral authority, its legislative authority and Ghana’s international image. So, to be honest with you, it’s a bad sign; one cannot be happy as a Ghanaian,” he told the host of Newsfile Samson Lardy Anyenini on December 4, 2021.

However, Senior Vice-President of IMANI-Africa, Kofi Bentil, believes that actions that led to the approval of the budget is best for Parliament as it changes the ‘winner-takes-all’ narrative in the House.

“Much as there seems to be quite a lot of chaos, and we are not happy with the kind of indecorous and dishonourable behaviour we see in Parliament, we need to bear in mind that this is not a bad thing.”

“It is not a bad thing for Parliament to scrutinise and hold the Executive to account, and the ultimate test of holding somebody to account is to look in the person’s face and say ‘no’.”

DISCLAIMER: The Views, Comments, Opinions, Contributions and Statements made by Readers and Contributors on this platform do not necessarily represent the views or policy of Multimedia Group Limited.
Tags:
E-Levy debate
Members of Parliament
Vice-President Dr Mahamudu Bawumia