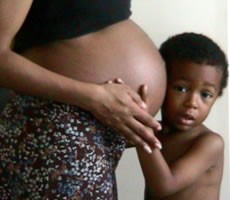 France’s First Lady Carla Bruni just announced that she’s expecting her first child with husband, French President Nicolas Sarkozy. Though the former supermodel looks amazing for age 43, her pregnancy will no doubt takes its toll on her sexy physique. Although she already has a son who’s nearly 10 years old from a past relationship, having a baby in her 40s might make the changes to her body during pregnancy all the more gruesome.

But before we go there, we will say that there are few things more beautiful than a pregnant woman… from a distance. Once you get closer, you tend to notice most expectant mothers are covered with bristly hairs, blotchy patches and a multitude of skin tags. As wondrous and miraculous as pregnancy may be, it also ushers in changes so intense they make puberty look like a cakewalk. Come along as we examine the many terrifying ways your wife’s body will change during her pregnancy.

She’ll turn into a gasbag

You know the way you feel after eating five pounds of bratwurst? Your wife will likely feel the same way during the duration of her pregnancy as she combats excessive bloating and rising gas levels. The average person passes gas 14 to 23 times a day, but pregnant women often double that odiferous output thanks to higher-than-usual levels of progesterone. This hormone relaxes smooth muscle tissue in the gastrointestinal tract, thereby making your wife sound — and smell — like she’s just returned from a chili-eating contest. Complicating matters further is the fact that a woman’s growing uterus crowds her abdominal cavity, slowing digestion and causing painful bloating.

It’s every man’s dream to have women drooling all over him, and in pregnancy, that’s precisely what happens. Many pregnant women suffer from ptyalism, a hormonal condition that leads to excessive saliva production. Ptyalism occurs most often during the first trimester, but it does affect some women during the full duration of their pregnancy, making their saliva almost as hard to swallow as your story about where you were until 3:00 am.

It’s perfectly natural for a woman to gain weight during pregnancy, but some men aren’t adequately prepared for the sheer number of pounds their spouse packs on. According to the latest data from the Institute of Medicine, the average healthy woman should gain between 25 to 35 pounds during her pregnancy. Approximately seven of those pounds should be the baby itself, with the rest of the weight divided among the placenta, the amniotic fluid, the muscle layer of the uterus, additional fluid and blood, and the 57 pints of Chunky Monkey she ate during her last trimester.

Pregnancy can be challenging at the best of times, but for many women, it’s literally a pain in the ass. That’s because a woman’s growing uterus puts pressure on her pelvic veins, thereby slowing the return of blood from the lower half of her body and increasing the pressure on the veins beneath her uterus. This causes the veins to become more dilated and can result in painful hemorrhoids and constipation. This problem is further complicated by the pressure exerted on a woman’s rectum from her growing baby. Add it all up, and it’s easy to see why so many women have difficulty getting comfortable during the later stages of their pregnancy.

You know what they say about men with big feet? Of course you do. You’ve been saying it ever since you noticed you had the largest feet among all your friends. But do you know what they say about women with big feet? They’re probably pregnant. That’s because pregnant women suffer from edema, an abnormal accumulation of fluid beneath the skin. This condition can cause swelling of the hands and face, but it’s especially evident in a pregnant woman’s feet and ankles since her rapidly growing uterus puts pressure on her pelvic veins causing blood to pool in her lower extremities. Edema generally occurs during the third trimester and is at its worst in warm weather and at the end of the day. The swelling usually disappears after childbirth, but some women find that their feet never return to their original size.