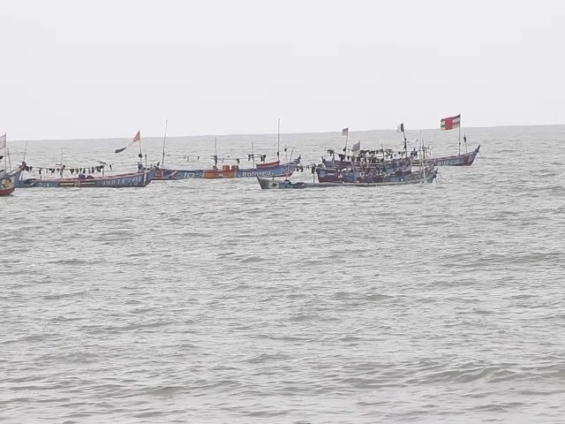 Canoe and Fishing Gear Owners Association of Ghana has described the Fisheries Ministry’s decision to suspend the supply of premix fuel to four fishing communities in the Central Region as selective enforcement of laws on illegal fishing.

The Association says such an enforcement approach is unsustainable adding that this would not help efforts to solve the problems in the sector and called for a more comprehensive approach to address the issues in the fisheries sector.

The National Premix Fuel Secretariat issued a statement indicating the suspension of premix fuel to British Komenda, Dago, Abandze, and Moree for their engagement in light fishing and other illegal fishing practices.

“Light fishing and other illegal fishing activities perpetrated by fishermen is seriously viewed by the Ministry of Fisheries and Aquaculture Development (MOFAD) and its agencies, because of its negative impacts on marine stock and industry growth.”

“The National Premix Fuel Secretariat and, indeed, MOFAD is aware that premix fuel, which is subsidised by the government, is regrettably used to fuel generators for the illicit practice of light fishing,” the statement added.

However, reacting to the decision by the Ministry, Chairman of the Canoe and Fishing Gear Owners Association of Ghana, Nana Kweigya said the fight against illegal fishing is being haphazardly implemented.

He stressed that other illegalities including the use of monofilament nets and undersized nets were going on in many other communities.

“The Ministry during the closed season said all IUU will be stopped and they specified the use of monofilament nets, use of undersized nets, the use of explosives, and light fishing. These were the four key forms of IUU that were mentioned at length”.

Nana Kweigya expressed the conviction that the Ministry was only using smaller, less agitative communities as scapegoats while the major culprit communities were being spared.

According to him, there were notable communities where light fishing went on unabated but had not been suspended and reiterated the point that the affected communities were being victimized.

Nana Kweigya expressed the willingness of the fishermen to support efforts to rebuild the fishery stocks but stated that it is important for the Ministry to meet with all stakeholders to seek general compliance.

“We believe that looking at the nature of our fisheries and the issue of livelihoods and the fact that there is unhealthy competition in the industry that is driving artisanal fishers out of business”.

“There is the need for us to sit down and have a comprehensive plan and strategy that will not focus only on enforcement but rather on compliance, because to us, enforcement is expensive and unsustainable”, he stated.

DISCLAIMER: The Views, Comments, Opinions, Contributions and Statements made by Readers and Contributors on this platform do not necessarily represent the views or policy of Multimedia Group Limited.
Tags:
Fisheries Ministry
Hawa Koomson
Premix Fuel