President Mahama joins ECOWAS leaders for mediation in The Gambia 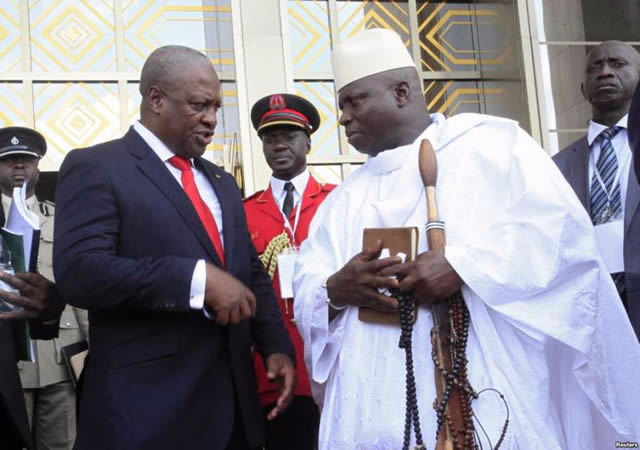 President John Mahama will Tuesday join other West African leaders to mediate the current political situation in The Gambia.

President Mahama will join Chair of ECOWAS, President Ellen Johnson-Sirleaf of Liberia and Nigerian President  Muhammadu Buhari to meet with and persuade President Yahya Jammeh to hand power over to Adama Barrow, the president-elect of the West African country.

Jammeh conceded after losing the Presidential election earlier this month to Barrow, a real estate mogul who has never held a political office.

“I’m calling you to wish you all the best, the Gambian people have spoken and I have no reason to contest the will of Almighty Allah,” Jammeh had said at the time.

Jammeh made an about-turn on Friday, December 9, 2016, addressing the country in a televised broadcast in which he announced the annulment of the election and alluded to foreign influence on the electoral body.

“After a thorough investigation, I have decided to reject the outcome of the recent election,” President Jammeh said.

“I lament serious and unacceptable abnormalities which have reportedly transpired during the electoral process. I recommend fresh and transparent elections which will be officiated by a god-fearing and independent electoral commission.”

The UN Security Council has asked outgoing Gambian President Yahya Jammeh to carry out a peaceful and orderly transition of power to the president-elect, Adama Barrow, the opposition leader who was declared the winner of the December 1 election.

In a press statement issued on Saturday, December 10, 2016,  the 15-member Council “strongly condemned the outgoing Gambian President’s rejection of the official election results proclaimed by the country’s Independent Electoral Commission”.

The UN Council asked Jammeh “to respect the choice of the sovereign people of Gambia, as he did on December 2, and to transfer, without condition and undue delay, power to the President-elect, Mr Adama Barrow.”